From Inkipedia, the Splatoon wiki
(Redirected from 3.0.0)
Jump to navigation Jump to search
Version 3.0.0
For Splatoon 2

After meeting certain conditions, Callie will appear at Tentakeel Outpost. Players can talk to Callie to hear stats about their performance in multiplayer battles.

In order to unlock Callie, players must have done these things:

Players who had already met those conditions before the update did not need to do anything to unlock Callie. 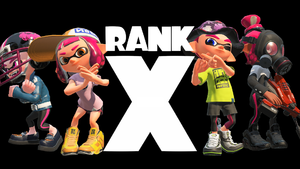 Player progression in Ranked Battle was enhanced with the addition of Rank X, replacing ranks S+10 through S+50. Players already ranked in S+10 through S+50 were automatically placed in Rank X. Rank X discards the rank meter in favor of X Power, a rating similar to Splatfest Power. Matchmaking is done based on X Power, so players will be fighting others with similar X Power rather than just anyone else who shares the rank. Monthly ranking lists will be published on SplatNet 2, featuring the players with the highest X Power. There will be a list for each of the four ranked modes that contains the top 500 players for the mode. An icon will show up above the player's name to show that they are in the Top 500. Another list will have the top player of each weapon. New lists will be made available on the final day of every month.[4]

At the time of the monthly ranking announcements on SplatNet, X Power will reset to "Calculating" status in-game. The calculation period, lasting 10 matches, determines if the player is eligible to remain in X Rank. It is also possible to drop out of X Rank outside of calculation periods, if the player's X Power drops low enough.

Following the update, the Ranked Battle stage roster became limited to 8 possible stages per battle type, with the stages being refreshed with different sets upon the X Power reset time. League Battles and Turf War were unaffected by this change.

Two new music tracks were added to be played during battles.[5][6][7]

The stage Camp Triggerfish was added.

113 new pieces of gear were added.

34 pairs of shoes were added.

Specifications for some of the sub weapons have been changed.

Specifications for some of the abilities have been changed.

Points required to fill the special gauge for some weapons have been changed.