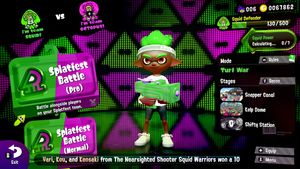 Normal mode can be played solo or as a team of up to four friends. Playing with fewer than four friends will add the appropriate number of other players to the team. Selecting "Continue" or "Change gear and continue!" allows players to continue onto the next battle with the same team.

Points for turf inked by individual players are added to the points earned by the team for winning a battle, resulting in a value known as "clout" and the side with the most clout at the end of a Splatfest is the winner. Clout is not added for battles between the same side.

If a team is on a winning streak, the game will try to match them against other teams on a winning streak. When there are multiple teams with the same number of consecutive wins, teams will be matched with a team as close to their skill level as possible.

When weapons, gear, or general styles of four players in a team meet certain conditions, a nickname and a synergy bonus will be given to the team. For example, if the four weapons on a single team are Aerospray RG, Kensa Splat Dualies, Krak-On Splat Roller and Luna Blaster, the nickname would be "The Baller Squad" since they all have the Baller as their special weapon. However, if the weapons are four Kensa Dynamo Rollers, they will be named "The Kensa Dynamo Quartet" instead. At least two weapons would have to be different (for example, a Kensa Dynamo Roller, Kensa .52 Gal, and two Kensa Splattershot Pros) for a name based on the Booyah Bomb. A synergy bonus can reward more Splatfest points or clout for victories.

Players receive clout equal to the opposing team's approximate Splatfest Power. The side with the most clout when the Splatfest concludes wins. Clout is not added for battles between the same side.

10× Battles and 100× Battles will now occur randomly, earning players on the winning team a boost of clout for their side. They occur for both Normal and Pro divisions. When a friend wins a 10× Battle, or if anyone wins a 100× Battle, that information will be displayed on the Lobby screen or the signboard in Inkopolis Square. The amount of Splatfest Power does not increase in these battles.

Continuing to earn experience even after a Splatfest Tee is at max level will earn players a random ability chunk each time they pass a certain point threshold.

One new track was added to be played during Salmon Run battles: Frantic Aspic by ω-3. The track plays during wildcard rotations.

Specifications for one of the sub weapons were changed.