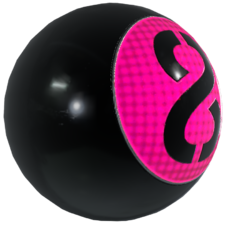 The 8-Ball is a mechanic in the Octo Expansion.

The 8-Ball is a plastic sphere, made to look like an eight billiard ball. It is a black ball with round pink neon on one side and the number eight marked on it.

The 8-Ball is guided through shooting it with ink. When it is shot with ink, it makes a trail of ink. It can also ink elements such as Inkfurlers. It slows down faster on softer surfaces, such as a sponge. There are switches that can be activated by pushing the 8-Ball into it, which are called 8-Ball Switches, similar to Splat-Switches. An 8-Ball goal is like an 8-Ball Switch, except when it is activated, the level is cleared. If a player makes the 8-Ball fall, then they fail the test and have to restart from the last checkpoint.

The 8-balls are used in all of the following stations in the Octo Expansion. Most of them are to guide the 8-Ball to the goal while the others are mini-games. Some other dedicated props may appear.

Datamining revealed that an 8-Ball Ranked Battle mode was in development.[Citation needed] This mode would have included an 8-Ball at the center of the stage and the players would have had to guide it to the other team's goal.