Agent 3 is the code name given to the player of Splatoon by Cap'n Cuttlefish in Octo Valley. They return as a supporting character and boss in the Octo Expansion. 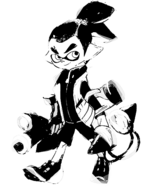 Agent 3 can have a variety of appearances, depending on the player's choice of gender, skin color, and eye color, as well as their current ink color. They wear the Hero Suit and can pick up armor to wear as well. They wield the Hero Shot by default but can use a Charger or Roller for amiibo challenges.

Not much is known about Agent 3's background, except that they are at least 14 years old since they have complete control over their squid and humanoid forms.

After following him through a manhole in Inkopolis Plaza, the player arrives in Octo Valley and meets Cap'n Cuttlefish outside his shack. He recruits the player as Agent 3, as part of the New Squidbeak Splatoon to steal back the Great Zapfish from the Octarians. He gives the agent the Hero Shot and a hand-me-down Hero Suit. The player goes through completing levels and defeating the Great Octoweapons. After defeating The Rampaging Octowhirl, Cap'n Cuttlefish gets kidnapped, and soon comes in contact with Agents 1 and 2. Agent 3 soon completes all the levels in Octo Valley and battles DJ Octavio. After the fourth phase, Agents 1 and 2 reveal themselves as Callie and Marie of the Squid Sisters, and play Calamari Inkantation, causing Cuttlefish to free himself. Agent 3 defeats Octavio and rescues Cap'n Cuttlefish and the Great Zapfish. The Great Zapfish is returned to Inkopolis Tower, restoring the city's power supply, while DJ Octavio is placed in a snow globe outside Cuttlefish's shack. Replaying the final battle shows a scenario where DJ Octavio has escaped from his snow globe and captured Cuttlefish again.

In Splatoon 2, the role the player takes in single player has been replaced by Agent 4. Agent 3 is mentioned various times throughout the game through dialogue, and Sunken Scroll number 25 reveals Cap'n Cuttlefish went off travelling with Agent 3 for some kind of research trip "at the cape".

Agent 3 returns in Splatoon 2's Octo Expansion. Agent 3 retains their original Hero Suit and Hero Shot, now also wearing a gray torn cape with a number "3" in Inkling which can be seen on other clothes like the Urchins Jersey. When Agent 8 collects three thangs, Cap'n Cuttlefish decides to make a "missing" poster for Agent 3, which has the player determine Agent 3's gender, skin color, and eye color.

After Agent 8 collects all four of the thangs, the Telephone builds them into a blender and tricks Agent 8 and Cap'n Cuttlefish inside until Agent 3 bursts in from the ceiling and destroys the blender, responding to Cuttlefish's CQ-80 device's distress signal. Agent 3 is then rendered unconscious and Cap'n Cuttlefish stays behind to look after them as Agent 8 escapes through the hole Agent 3 made.

The Telephone then attacks Agent 3 and partially sanitizes them. Under the control of the Telephone, they tie up Cap'n Cuttlefish and later on attack Agent 8 before they can leave. After being defeated, the sanitization disappears, leaving Agent 3 once again unconscious. They wake up after Agent 8 defeats the NILS Statue and Commander Tartar, now with a band-aid on the back of their head as the credits roll.

When Agent 8 comes back to the Deepsea Metro, Cap'n Cuttlefish tells them that Agent 3 went back on patrol, explaining their absence. After Agent 8 completes all the tests, a locker in Central Station opens and Agent 8 has a flashback to the first time they heard the Calamari Inkantation, prompting a final battle against their "Inner Agent 3".

Both Goggles and Rider act as Agent 3 in the Splatoon manga as Agent 3 and Agent 3.5. They appear in Chapters 8 and 9, which follow the events of Splatoon's Octo Valley. Both of them are Inkling boys wearing the full Hero Suit with the addition of wearing their the gear they are named after, being the Pilot Goggles and Black Inky Rider. They also use the Hero weapons from the same main weapon class as their usual weapons, with Goggles having the Hero Shot and Rider having the Hero Roller. In the Octo Expansion arc in Chapter 25, Rider mirrors the same role as Agent 3 in the game, where he rescues the Blue Team, Agent 8 and Cap'n Cuttlefish from the blender and later becomes mind-controlled. He also has the cape Agent 3 wears in Octo Expansion, but uses his Gold Dynamo Roller instead of a Hero weapon.

In the Splatoon Heartwarming Squids 4-Koma & Play Manga, Agent 3 is represented as a female Inkling who also is the main character, appearing with either green or orange ink.