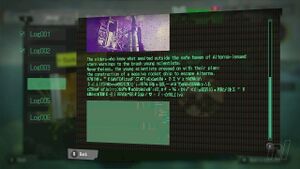 The Alterna Logs are unlockable logs found in Alterna. They were created by O.R.C.A. as a means of documenting key information on the species and civilizations of the world from its creation onward.

In every site, there is a new log to be filled out, totaling at six. However, a secret seventh one can be found by clearing After Alterna, the final level after completing the main story mode. Each log starts out with all text scrambled and therefore incomprehensible, including the images, but completing missions in an area will decode them incrementally, eventually leading to a completed log once all missions in said area are cleared. Completing a level for the first time reveals one line of text at a time, but if there is an image displayed beneath it, then that image is revealed, too.

All seven have been reproduced below.

As technology advanced at an exponential pace, so too did prosperity...and ultimately conflict. Before long, the entire world was embroiled.
In the end, nearly all life on Earth was wiped out.
As humans squabbled, natural disasters intensified. Volcanic eruptions leveled cities. The sea rose and began to consume the planet. Humanity experienced a mass-extinction event.
Soon, the surface of the Earth became a barren wasteland, completely inhospitable to life. 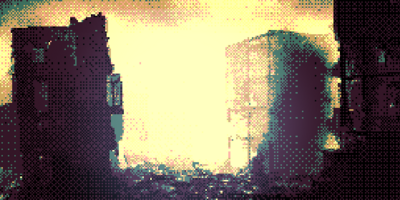 Error! Against the odds-computed to be 42,791 to 1-some humans survived. Therefore, the planet was only NEARLY completely inhospitable to life.
These survivors found shelter in a vast cavern created by a cataclysmic volcanic eruption. 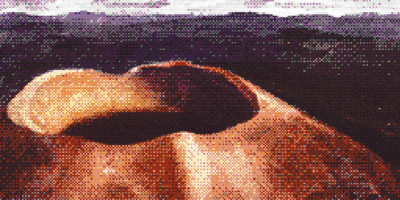 The cavern provided shelter, and a massive pool of accumulated seawater provided life.
For while humanity was being decimated, marine life flourished.
All manner of squids, octopuses, and jellyfish had propagated in the deep. The surviving humans had found a source of sustenance... 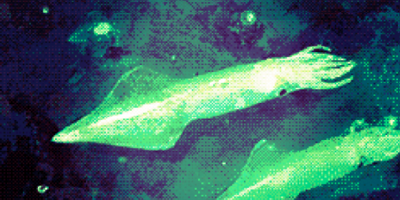 The surviving humans appointed scientists to lead their new society, believing that science would provide a wiser path forward.
Fully empowered, these scientists took on the monumental task of establishing a sustainable ecosystem within the cavern.
They dubbed this new society "Alterna" and began the process of recreating the Earth they had once known. 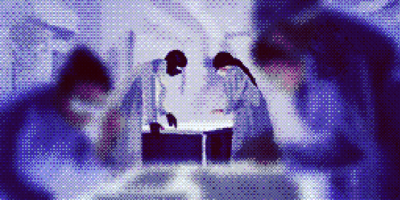 Of course, not even scientists are immune to nostalgia. The humans began constructing large-scale 3D-printing operations.
This allowed them to recreate some of humanity's favorite artifacts within the confines of Alterna. 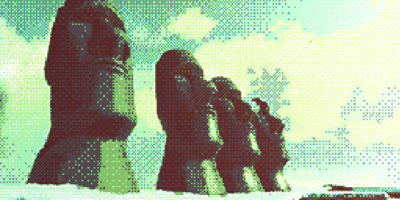 Additionally, they created a robust information management system, designed to indelibly record all of humanity's precious knowledge.
Such a system would naturally require some sort of record keeper. A computer that could autonomously observe and record data.
The scientists achieved their aim with the development of O.R.C.A.
Also known as the Omniscient Recording Computer of Alterna.

As life in Alterna moved forward, one scientist discovered a new way to make liquid crystals from the bodily fluids of squids.
These new crystals could change color in response to faint and fleeting electrical signals emitted by living organisms.
To put that in more human terms...these crystals could read minds.
And then output imagery that matched the viewer's innermost thoughts. 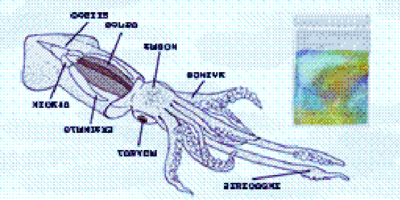 Humans were enchanted with this new invention and began mass-producing the crystals. Eventually, they lined the walls and roof of Alterna.
As the crystals absorbed the collective desires of those in Alterna, they assumed the appearance of the sky as it was seen on the surface long ago.
At last, after 25 years of being confined beneath the Earth, humanity could once again look up and see the sky. 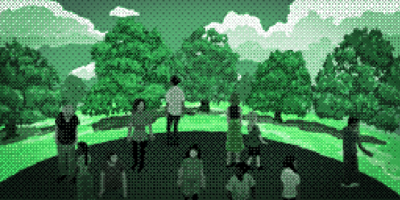 The years passed with prosperity. The population of Alterna grew like a rising tide.
The scientists, now elders of their kind, believed they had done all they could to advance the civilization of Alterna.
They began selecting new leaders to succeed them, entrusting to them the world they helped build.
Humanity's new leaders inherited both the brilliance of their predecessors and their unquenchable thirst for innovation.
This new generation, born and raised in deep Alterna, would prove to be every bit the match of those they were to succeed.
They soon grew restless at the sight of the liquid-crystal sky, believing they deserved to behold the reality that existed outside the cavern. 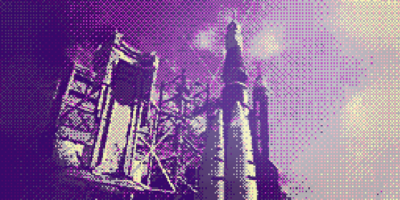 The elders-who knew what awaited outside the safe haven of Alterna-issued stern warnings to the brash young scientists.
Nevertheless, the young scientists pressed on with their plan: the construction of a massive rocket ship to escape Alterna.
Sadly, as the boosters were ignited for the first time during a launch test, tragedy struck.
The energy from the rocket boosters overloaded the cavern's liquid crystals.
A violent and terrible chain reaction ensued.
Without warning, the stone walls of the cavern began to shatter, raining debris down upon humanity.
Alterna, the last civilization of once-prosperous humanity, was no more. And those few who escaped the carnage would soon follow it into death. 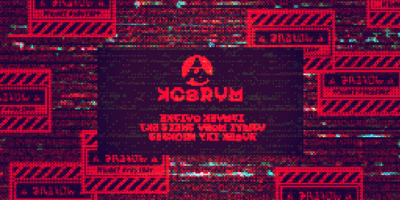 As the inner walls of Alterna collapsed, thousands of tons of rock and liquid crystal plunged into the waters below.
As these crystals washed to and fro among the flotsam and jetsam of humanity's former colony, they broke into microscopic fragments.
Because they had repeatedly absorbed and reflected humanity's wishes over so many years, the crystals retained those...feelings.
Little by little, the squids, octopuses, and assorted sea creatures that thrived in the waters of Alterna absorbed these crystals into their bodies.
This process continued until, one day, the marine organisms began to feel something. Something...fresh.
These fresh impulses bore a striking resemblance to humanity's passive desire to return to the Earth's surface. 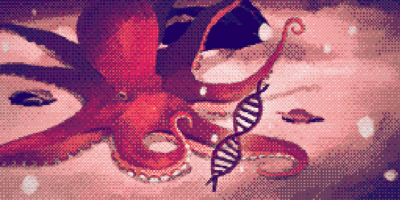 Spurred by these impulses-and whatever else may have been floating in the polluted waters-the sea creatures began to evolve rapidly.
Each species developed pulmonary respiration, mobility, and other traits consistent with land-dwelling creatures. They began to adapt.
Their intelligence grew at a remarkable pace across generations.
Some species even gained extraordinary camouflage capabilities.
A point of no return arrived. The sea creatures of Alterna set foot on dry land and never looked back. Like humans, they strove for the surface.
Of course, survival on land was harsh. But the creatures were persistent. Soon, they found the tunnels that humans had used to escape the apocalypse.
With their path forward now clear, these fresh, fledgling beings left the ruins of Alterna behind and set their sights on the surface world. 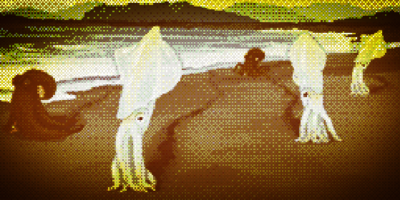 The beings that had emerged from the water soon emerged from the cavern of Alterna itself.
From there, they flourished quickly. It wasn't long before they had explored every corner of the world.
This epochal event gave great significance to the crater above Alterna and its surrounding territories, now referred to as the Splatlands.
The region would, from that point on, be known as "the land of fresh beginnings" among the creatures that now thrive on the surface.
These newly evolved beings, having scattered themselves across the globe, soon gave rise to distinct cultures and unique ways of life.
Out of all the species now roaming the Earth, squids and octopuses soon distinguished themselves via intelligence and "fresh vibes," so to speak.
It wasn't long before they became the apex species of the planet. 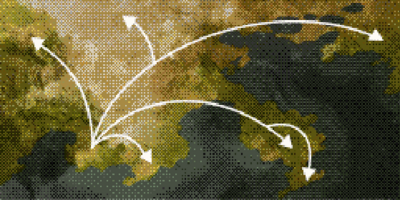 Now...I must fast-forward a bit. Five thousand years later...a peculiar individual was born.
This squid quickly rose to fame in the Splatlands due to some...unique characteristics.
Yes, this individual was embraced as a prophet, gifted with numerous revelations that they shared among their fellow squids.
It was another turning point for squidkind. During this period, the foundations for modern cephalopod civilization were laid.
That individual squid is now widely known and celebrated as the progenitor of the modern-day Inkling. 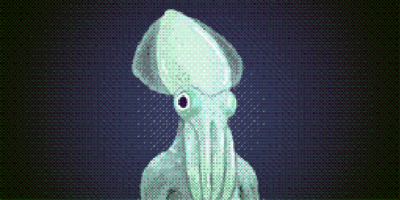 Log.exe: Return of the Mammalians

Recall, for a moment, the first apocalypse that devastated the human race. Those who escaped into the caverns of Alterna were not the sole survivors. There were others who escaped via a giant rocket ship-the Ark Polaris. Launched in the nick of time, this ship was laden with many of Earth's species that had been placed in a cold sleep. The mission was simple-find another planet to replace the Earth. 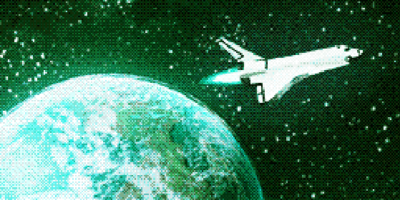 Considering the circumstances of its launch, the Polaris had a smooth voyage...until it reached the edge of the solar system. It was at that point that debris struck the vessel, damaging its navigation system. The crew was able to turn the ship around and and head back toward Earth, but the effort was in vain-there was not enough fuel to attempt a landing. The Ark Polaris drifted aimlessly for 10,000 years. 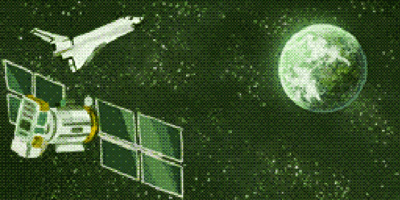 Eons passed. The once-stable orbit of the Polaris decayed over time until the ship found itself in the inescapable pull of the Earth's gravity. Reentry was not kind to its inhabitants-all perished, save one. Bear #03, an experimental subject who had retained consciousness within his cold hibernation, survived. For 12,000 years he had dreamed. And plotted. 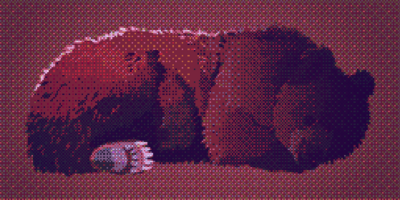 Fully awakened, Bear #03 came to a terrible realization. He had not landed on a new planet at all. He was back on Earth. And yet, it was not an Earth he knew. This Earth, it seemed, was dominated by sea creatures. Not a single mammal to be found. 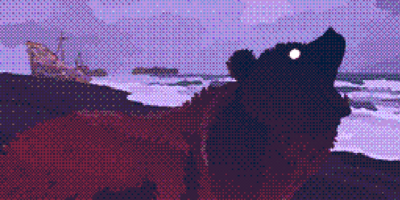 In the course of his search for a single fellow mammal, Bear #03 used navigational equipment from the wreckage of the Ark Polaris to discover Alterna. It was a wasteland, of course, but a few of the liquid crystals that had once covered the walls and ceiling remained. With knowledge built during his thousands of years of dreaming, he repaired some of Alterna's facilities and began researching the crystals... 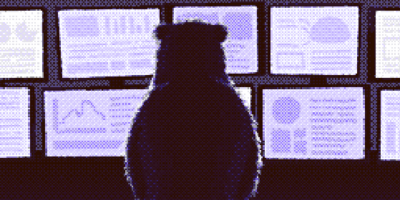 This research bore fruit when Bear #03 compounded some of the liquid crystals with his own fur. The experiment created an entirely new substance with one terrifying property-it could transform any living creature into a mammal. Bear #03 realized the implications immediately. He could restore the planet to a mammalian paradise! He began stockpiling Fuzzy Ooze, as he called it, within Alterna's still-intact rocket... 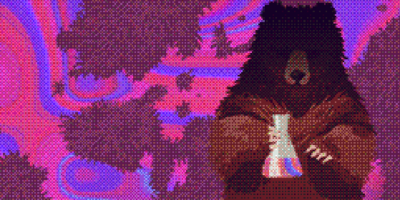 For such a venture, he would require the acquisition of thousands of Golden Eggs. These were used in the creation of the Fuzzy Ooze, although the exact details have never been recorded in my memory banks. But Bear #03 had a plan. He founded a corporation that would go on to employ locals to collect his Golden Eggs under the name Grizzco Industries. Mr. Grizz, as he was now known, would pay handsomely for them... 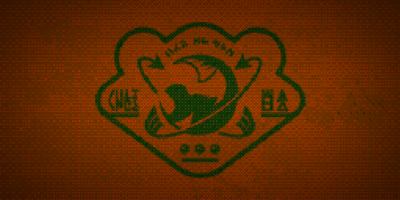 With Fuzzy Ooze production peaking thanks to the assistance of unsuspecting Inklings and Octolings, Mr. Grizz took the final steps to set his plan in motion. The rocket was loaded...It wouldn't be long now. 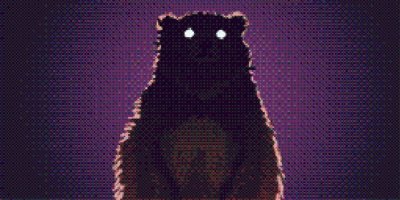