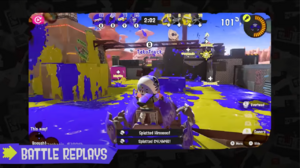 A replay being watched

Battle Replay is a utility introduced in Splatoon 3 that can be accessed via the Lobby Terminal in the Battle Lobby.

The Battle Replay mode lets a player view a re-creation of recent previous battles, with camera tools similar to Spectator View in Splatoon 2 and controls to pause and rewind. There is also a tool that allows the player to mark points in the recording as "Highlights". Up to five replays can be pinned as favorites. Additionally, battle replays can be uploaded to the cloud and searched for using the Replay Code feature. Once the game is updated, all replays made prior to that update will be inaccessible.

Players can temporarily modify their Battle Lobby and Splatsville ink color by viewing a replay. Upon exiting out, the player's ink color will match the one they had in that replay. This will not work during Splatfests, and will also not work with Splatfest replays.