The Big Bubbler[1] is an upcoming special weapon in Splatoon 3.

The Big Bubbler consists of three parts: the barrier generator, its launcher, and the barrier itself. The launcher is an Inkling (or Octoling) sized spinning top launcher which changes color to match the user's ink, faces upwards, and has a Squid Beakon-esque contraption at the top. It has a black ripcord, which is pulled off when the the generator is launched upwards. The generator itself has an hemispherical shape, changes color to match the user's ink, and has a white aerial screw on the top as its propeller. The barrier itself is a big, blue, translucent sphere with light blue lines. 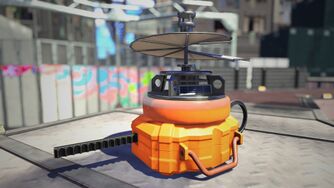 When deployed, it creates a temporary, immobile, spherical barrier with the barrier generator at the barrier's top. The barrier itself cannot be penetrated by enemy ink and detonates enemy bombs on contact. The shield shrinks if the generator is hit by enemy ink. It is currently unknown if the Squid Beakon on the launcher is purely aesthetic or can be Super Jumped to. As of the Release Date Revealed trailer, it is a part of the Splat Roller's set.