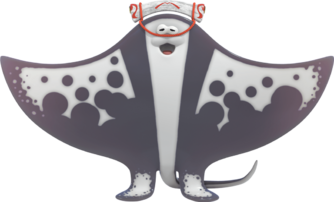 Big Man is a character in Splatoon 3 and one of the three members of the band Deep Cut, alongside Shiver and Frye, with whom he co-hosts both Anarchy Splatcast, the news show of Splatsville, and Splatfests. He is also the fourth reachable boss of Return of the Mammalians. His signature color is gray.

His voice actor is currently unknown.

Big Man is a large dark-gray manta ray, with white dotted markings along his belly and on both sides of his pectoral fins, as well as a perpetual sheen. He stands on his pelvic fins as if they were feet, and his eyes are closer to his mouth along the bottom of his body, giving him an anthropomorphic appearance.

Where a regular manta ray's eyes and cephalic fins would be, Big Man wears a white headpiece. It appears to be carved out of bleached driftwood, with red swirls an a stylized "M" painted on it. The hat is tied to his head with a red rope between his eyes and mouth; this particular fashion of hat-securing bears strong resemblance to classical Japanese bandit characters, such as Kabuki character Nezumi Kozō, a famous thief that wears a hokkamuri headscarf tied under his nose.

In Alterna, he wears a beige mask, which partially resembles an oni mask but with fish inspiration instead of a humanoid one. Unlike his fellow idols, it only covers his eyes and rests atop the string of his hat.

During Splatfests, Big Man's sheen is tinted his team's color, giving him a slight glow.[2] In certain circumstances he also wears a manta ray mask, which takes inspiration from Japanese hannya masks. 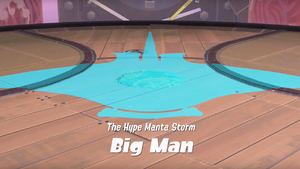 Big Man and the rest of Deep Cut are initially hostile to Agent 3 and the New Squidbeak Splatoon, declaring that the treasure in Alterna is theirs to plunder and that they won't let anyone else have it. Later, when the Squidbeak Splatoon team agrees to give Deep Cut the treasure (after using it to remove Fuzzy Ooze), they decide to become the player's ally and help them in defeating Mr. Grizz. Big Man personally gives the player a version of the Hero Headset with a transparent helmet modification, presumably to help Agent 3 survive in outer space.

Big Man is the fourth boss of the single-player campaign, Return of the Mammalians, and the third Deep Cut boss. His boss kettle is found at the Happiness Research Lab Site.

"Big Man" is a combination of his size and a pun on the shortening of the word "manta".

Speech in other languages

Introduction in other languages