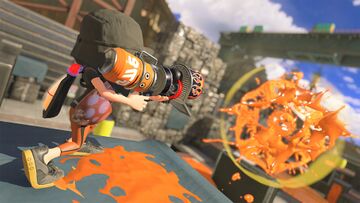 A promotional image for Splatoon 3 featuring an Inkling wielding the Blaster, a weapon included in the blaster class.

For the main weapon with the same name, see Blaster.

Blasters are one of the main weapon types in the Splatoon series. Blasters are fully-automatic guns that fire large globs of ink that travel forward and conclude their path with an explosion, with typically lower rate of fire than traditional shooters to compensate.

Spawning in before match starts: