Heyo! So I made some custom Splatoon stars, and I was wondering if you could help me with some Splatfest ideas? I'll give more info on them, but for right now, I'M OUTA HERE! See ya. 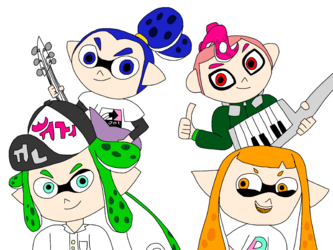 Kids of Cephopolis is my custom Splatoon Idols. They first started as a small band, like perhaps Squid Squad, but popularity began increasing. Before their big popularity, they made a cover of Now or Never, and other minor battle songs. After they hit popularity, they did demo covers of other songs to practice singing for a crowd. They now do Splatfest songs and Inkopolis News.

Squidden is one half of the Singing duo part of Kids of Cephopolis. He has a mysterious presence, but he is actually calm, kind, and pretty laid back. He's a good singer and can also play the guitar. He prefers the Splat Brella. He met Inky by pure coincidence, and they hit it off well due to common interests. He likes skirts because they're comfy and easy to wear, nothing more.

Inky is the other half of the Singing duo part of Kids of Ceohopolis. She is fun loving and wild! She also sometimes likes to poke fun at Squidden. She's very talented vocally and plays piano quite well. She also enjoys painting in her spare time. She has a bit of a temper. She prefers the Roller. She also has relations with Squidward. She likes shorts, because she doesn't risk people looking up her skirt (if she wore one).

William Squidward Splatson is the blue inkling that plays the electric guitar. His music is usually used for Normal battles, but will sometimes be used for Splatfest music. He is Inky's love interest. He is 22 years of age.

Benjamin Dovyr, or Ben, plays the keyboard. After popularity struck their band, he got a keytar. He has a crush on Marina, as well as a brotherly friendship with Squidward. He occasionally refers to Squidward as "Senpai" meaning "upperclassmen". He is 22 years of age.

Kenneth, or Ken for short, is the drummer for Kids of Cephopolis, he is an inkling who developed wrong. He looks like a normal inkling with the same skin color as his ink. He is Inky's older brother, and is 25 years of age. Ever since he was young, he had always wanted to be a drummer. When he found out about his younger sister's band, he decided to join as a drummer upon her asking.

Splatfests so far (feel free to add any)