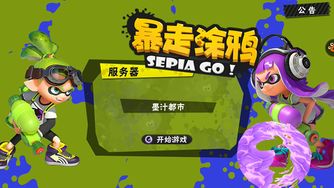 Sepia Go! (暴走塗鴉 Sepia Go! Bàozǒu Túyā Sepia Go!) is a bootleg of Splatoon made by Nine Tour for the Android mobile phone. There are footages of Sepia Go! that are being taken down by Nintendo due to copyright.

Like Splatoon, Sepia Go! is a third-person shooter game focused on online multiplayer battles, in which eight players are divided into two teams of four. In the game mode Turf War, teams fight to cover the arena in as much ink of their team's color as possible. Players have two main forms and may switch between the two at will: their humanoid form, in which they can use weapons to spread ink and splatter opponents, and their squid form, which they can use to swim through ink at great speed and up walls, recharge the player's ink tank faster (while in their own ink), and hide in their team's ink. Players can also utilize Sub Weapons, such as Splat Bombs, and Special Weapons, such as Inkzookas.

In the primary game mode, Turf War, players are awarded points based on the amount of land they cover in their team's ink—the team that covers the most territory within three minutes wins the match.

Sepia Go! also features a single player Hero Mode, which sees the player travel to Octo Valley and traverse levels based on 3D-platforming and puzzle solving.