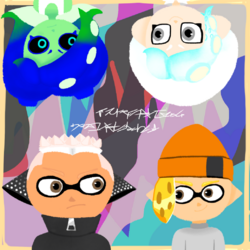 Turf and Tide was the replacement band for Kids of Cephapolis after they hit it big. The band was made by brothers Rick and John. The main genre of music tends to be synth-rock.

John is a 25-year-old Inkling who loves rock music. He was the one who proposed the idea of Turf and Tide. He is extroverted and optimistic, and he loves his brother, Rick, very much. His main instrument is the electric guitar, and he may sometimes do vocals.

Rick is a 34-year-old Inkling who decided to join his brother in his musical career. He is introverted, slightly pessimistic, married to Penelope, and has three adopted Octoling children named Meg, Ciara, and Kat. His main instrument is the electric base, and he also does bass vocals.

Kat is a 12-year-old Octoling. She is an early bloomer, as she is fully developed at a young age. She is very energetic and fun loving, yet also a little selfish. She escaped the octarian society and met up with Rick, whom she now calls her father. She plays the keyboard, which can add any instrument needed for the song.

Ciara is a 16-year-old Post-Sanitized Octoling who is still recovering from the process. She is somewhat robotic, yet personality may sometimes strike up. She sometimes does vocals. Her digital-sounding voice adds flair to Turf and Tide's music.