An Inkling using both North American signals in Splatoon.

Signals are quick messages in online multiplayer battle modes in the Splatoon series. They are only sent to members of the same team and serve as a means of communication and finding friendly players in danger. There are two different signals: one used to indicate joy and one used to call other players to the caller. The messages have some visual and audio effects, accompanied by the message's text appearing on-screen. These signals are not visible or audible to the opposing team, nor can they see the user make a pose.

At any point during a match, a message may be sent by using

; the message depends on the direction pressed. It is possible to send the down signal at any point, but when the player has been splatted, the up signal becomes unusable in Splatoon and changes to "Ouch.." in Splatoon 2. This is perhaps to stop players from calling their friends to certain demise. When the player is in a life ring after being splatted in Salmon Run, the up signal changes to "Help!", to indicate that they need to be revived by a teammate.

In Splatoon 2, the Booyah Bomb special weapon added in Version 4.1.0 utilises the down signal as part of its gameplay. When activated, the user and their teammates are prompted to press the down signal as fast as possible. Doing so speeds up the charging of the attack and slightly fills up the special gauge of any ally that contributed.

In Octo Valley, Octo Canyon, and Return of the Mammalians,

serves to switch between sub weapons instead. 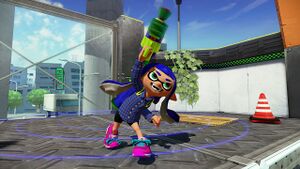 An Inkling Girl performing the up command.

When the player sends a signal, some rings come out from below their character and the text corresponding to the message appears on-screen above the messenger. If the player is standing still, they also strike a pose which can be canceled at any time by moving. For other players on the same team, the message's text sticks to the borders of the screen when they are not facing the signaling player and appears through walls, regardless of distance. Teammates that are sending a signal have the message displayed on top of their large button on the map screen.

Audio-wise, teammates can hear a player announce their signal out loud if they are in range. In Splatoon, the

also plays signal voice clips from teammates, regardless of distance. As for the calling player themselves, their own character's signal shout only plays very quietly.

It should be noted that if a player uses a signal after being splatted, or shortly before, their signal's text appears on the bottom of the screen, even when the camera shifts to the splatter. This can cause some players to think that the opponent used a signal and they were able to see it, while this is not the case.

Currently, there are two signals in-game, activated by pressing Up or Down on . The exact text sent by the signals differs between region.

At its core, the intent is for the up signal to alert teammates that the player needs help or wants teammates to Super Jump, and for the down signal to serve as a general happiness shout. The signal's text appears on the screen of each person on the player's team, but while the signal is the same, the on-screen text corresponds to the respective player's region. For instance, if a North American player in Splatoon presses Down on , they see "Booyah!" on their screen, but a European teammate sees "Nice!". Because of this, some confusion may arise if players misinterpret the up signal, which could be seen as either encouragement or a cry for help, due to the ambiguity of the term "C'mon". In response to players' criticisms of this ambiguity, the up signal was changed to be "This Way!" in Splatoon 2.[1]

Signals cannot be used while in Recon mode, the Shooting Range, Battle Dojo, Inkopolis Plaza, Inkopolis Square, Octo Valley, Octo Canyon, or in the Deepsea Metro. In Alterna, the up signal can only be used with Smallfry selected, to call Smallfry back to the player once thrown.