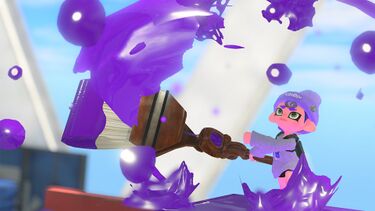 An Octoling swinging an Octobrush, one of the main weapons included in the Brush class.

Brushes are one of the main weapon classes, introduced as an independent weapon class in Splatoon 3. In the previous titles of the Splatoon series, Brushes were part of the Roller class, with which they share some technical characteristics. Brushes have two attack modes: by repeatedly pressing , the player will make their brush-type weapon swing and sprinkle ink globes that spread forwards, inking the floor; by holding and moving, the player will instead push the brush on the ground, similar to a roller, but much faster and covering less area. While the first attack mode is effective for inking the stage and splatting opponents, the latter is more useful for escaping enemies or encircling them to trap and easily splat them.