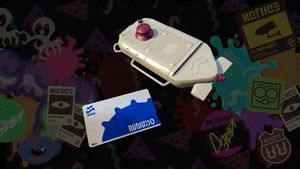 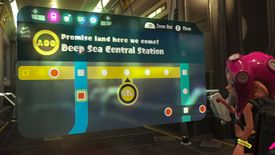 Agent 8 using the CQ-80 to view the Deepsea Metro Map.

The CQ-80 is a device in the Octo Expansion, given to Agent 8 by the Telephone, revealed to be Commander Tartar. It allows the player to select stations to travel to, as well as having other functions.

. Doing this opens a menu where the player can select missions, view currently collected mem cakes, view chat logs from Marina's chat room, and change their in-game appearance. The player can also return to Inkopolis from here by pressing

makes the map zoom in on the currently selected station, while also displaying information about said station, such as the name of the stations and the weapons available if the station contains a mission.

The second page allows the player to view all collected mem cakes. Pressing

lets the player take a closer look at the mem cake and read a small poem about it. While looking at a mem cake, the player can rotate the camera with

and zoom in and out with

The third page allows the player to view chat logs sent by Marina. These include conversations between Pearl, Marina, and Cap'n Cuttlefish. New chat logs are sent after Agent 8 completes certain numbers of missions; Marina will tell them when new logs are available.

The fourth and last page contains a single option that allows the player to change Agent 8's appearance.