The catalog is an item in Splatoon 3 that can be obtained from Harmony at Hotlantis. It allows the player to unlock various seasonal rewards, primarily for customization.

The catalog is a free in-game seasonal collection of rewards the player can unlock through accumulating points in-game. It can be received from Hotlantis upon reaching level 4. Catalog rewards include exclusive emotes, gear, locker room items, and Splashtag banners, titles, and badges,[1] as well as food tickets and ability chunks.[1][2] Its structure can be compared to the battle pass system of similar games.

If the player raises their catalog level during a Splatfest Sneak Peek, they receive a conch shell to spend on the Shell-Out Machine.[3] Catalog Points received after Splatfest Battles or Big Run are multiplied by 1.2×.

Following Splatoon 3's launch, a new catalog is distributed every three months for two years. In the Splatoon 3 Nintendo Direct, each planned catalog is labeled after a season and year. New weapons plan to be added to the game in updates around the same time as catalogs. [2]

Some of the catalog gear must first be unlocked through leveling up the appropriate catalog. The other pieces of gear can be obtained through Shops beforehand, in which case reaching the catalog level that would give the gear instead gives the player the gear's cost in Cash. 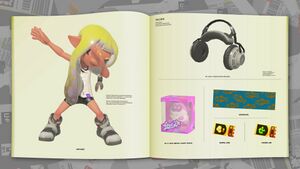 A preview of Splatoon 3's first catalog shown in the Nintendo Direct.

This is the first released catalog upon Splatoon 3's launch, available from launch until 1 December 2022 at 00:00 UTC. Titles, Tableturf Battle cards, food and drink tickets, and banners given are random unless specifically shown in the catalog.

* Only unlockable through catalog. Once unlocked it can be bought in shops to raise the star power or ordered through Murch.

* Only unlockable through catalog. Once unlocked it can be bought in shops to raise the star power or ordered through Murch.

Maxing out a catalog replaces the seasonal catalog with a new one giving a Mystery Box for every ten levels gained. Maxing out this catalog repeats the process until the end of a season where the total amount of levels will be revealed to the player why getting the new seasonal catalog.