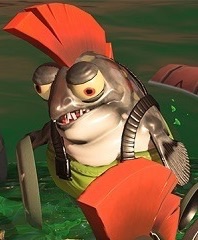 Cohocks are a type of Salmonid that appear in Salmon Run in Splatoon 2 and Splatoon 3.

They are similar to Chums, but they can instantly splat players with their frying pans. Cohocks move slower than most Salmonids but can take far more damage before being splatted. Cohocks are significantly larger than Chums and also larger than some Boss Salmonids. During the event Cohock Charge, they are the only Lesser Salmonid to spawn.

The Cohock's name could be a combination of the name of a real type of salmon, the Coho salmon, and the mohawk hairstyle that it sports.