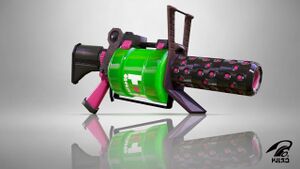 The .96 Gal functions differently than its appearance in Splatoon 2

Echolocator while it cannot inflict damage on opponents, can help an entire team while active:

Echolocator, while it can help a team, will run into problems if multiple players on a team have it for a few reasons:

With the Version 2.7.0 update, the .96 Gal can be reduced to a 3-hit kill with just one Defense Up main ability or 3 Defense Up sub-abilities. Since the .96 Gal fires slowly for a shooter, a single extra hit needed makes a significant difference, so at least a small amount of Damage Up is strongly recommended.

The .96 Gal is an extremely ink-hungry weapon, so mitigating this is a good idea, with Ink Recovery Up allowing for long term and frequent map presence.

Ink Resistance Up allows more maneuverability and speed while walking or swimming through it, and is effective in escaping tough situations, particularly when out of ink to reduce damage taken and increase the probability of survival. 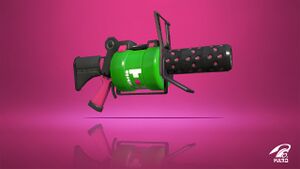 The unique traits of the .96 Gal and its build make it a support weapon.

The Sprinkler can be used in a variety of ways to help a .96 Gal user:

Ink Armor allows its user's team to either initiate a push, to recapture a Splat Zone, for example, or maintain one, such as while locking out the opponent.

The .96 Gal is good at turfing, building up Ink Armor, and, unlike some other Ink Armor-based support weapons, has high damage. However, its slow firing rate makes it vulnerable up close, and its lack of bombs reduces its ability to zone out opponents during the neutral phase. Therefore, it makes a good complement to – and is well complemented by – a more rapid firing weapon with a bomb (preferably a lethal bomb), such as the Tentatek Splattershot or the Neo Splash-o-matic.

The .96 Gal's lack of lethal bombs – particularly either Splat or Suction Bombs – generally necessitates its user's teammates to equip weapons that include them. Lethal bombs provide their user's team a couple advantages over another team that has no lethal bombs in its composition:

Multiple Ink Armors used by the same team do not stack. Therefore, it would be redundant for a team to have more than two Ink Armor users.

The .96 Gal is one of many weapons whose damage is increased by Main Power Up, maxing out to 77.5 points of damage at the full 57 ability points.

Even with its low special gauge requirement for Ink Armor, the .96 Gal can further hasten its rate of building up the special gauge, increasing the already high frequency of potential Ink Armor usage.