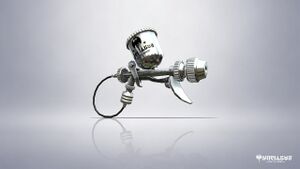 Like the Splattershot Jr., the Aerospray MG is a support weapon:

While less reliable than its other variants, the Curling-Bomb Launcher can still perform some of its intended tasks, namely repel opponents' pushes:

The Aerospray MG does hold some solid niches with some map and mode combos.[7]

Like the Splattershot Jr., the Aerospray MG excels at turfing and building up its special but is short-ranged and weak in direct combat. Therefore, it is recommended that its teammates have weapons that are capable of confronting opponents either head-on or from a distance.

Ever since its introduction in Version 4.3.0, Bomb Defense Up DX will not only reduce the damage taken from opposing sub and special weapons that are not one-hit-splat but will also reduce the duration of the tracking effects of certain opponent's sub and special weapons, such as Point Sensors and Ink Mines, allowing the user of this ability to evade detection more easily. This is a useful ability for almost any player, even a Aerospray MG user, who does not directly engage their opponents. Just one sub, or three ability points, offers plenty of utility:

Any player, including a Aerospray MG user who avoids direct confrontations, is expected to come in contact with the opponent's ink on various surfaces, which can both be damaging and reduce mobility. Ink Resistance Up not only partially offsets the reduction in mobility but also delays the damage taken from contact with opposing ink. Just one sub, or three ability points…

Ink Saver (Sub) allows more frequent use of Suction Bombs and saves ink for the main weapon after each Suction Bomb used. Because a Aerospray MG user will be using more Suction Bombs than other weapons, having constant will help the user push in.

Last-Ditch Effort is a Headgear-exclusive ability that, under specific conditions, grants its user 1 to 24 ability points for each of the following abilities:

Like other support weapons whose builds include bombs, the Aerospray MG. can greatly benefit from the reduced ink consumption per Suction Bomb used, allowing its user to spam Suction Bombs during either a crucial defensive stand or a late attempt to reclaim the lead.

The Aerospray MG benefits most from the second buff, allowing it to consistently break Ink Armor in one hit.

Swim Speed Up increases swim speed. Because a Aerospray MG user has a hard time splatting, Swim Speed Up can help escape the situation or to push in.[10]

The Aerospray MG is equipped with Fizzy Bomb and Reefslider in Splatoon 3. The Aerospray is a great turfing weapon, and the Reefslider can make a push into enemy territory.