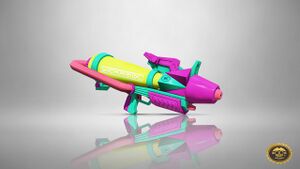 The Berry Splattershot Pro is a weapon with long range. Having too many longer ranged weapons can be a disadvantage for a few reasons.

Because the Berry Splattershot Pro is inefficient at turfing, its user will have to rely on their teammates to maintain map control. Not having enough turfing ability – usually from having too many blasters and chargers – presents its own set of problems:

The Bomb Rush is very effective at contesting territory, such as Splat Zones, but is not as reliable at splatting opponents who actively avoid the bombs. Attempting to pursue certain opponents with Bomb Rush active further risks getting splatted. Therefore, it is advised to have other special weapons available to complement Bomb Rush, as having too many users of any Bomb Rush variant (no more than two) in a team composition will limit a team's arsenal of weapons:

Coordinating with your teammates can greatly increase the Bomb Rush's effect during a battle:

Damage Up increases damage to the main weapon, sub, and special. Damage Up can make the Berry Splattershot Pro close to a two hit splat, or guarantee a three shot splat.

The Berry Splattershot Pro is a weapon with poor ink coverage making it hard to get map control using only the main weapon. Having consistent Bomb Rushes can help with taking back map control and to stop pushes.

Because of its poor ink coverage, the user is likely to contact enemy ink often. Ink Resistance Up can help run faster in enemy ink, and reduce the damage taken by stepping in it.