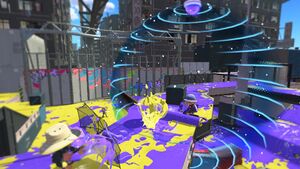 If placed carefully, the Big Bubbler can protect you and your team by blocking incoming attacks:

Despite its strong protection, The Big Bubbler has a few exploitable weaknesses:[2]

While primarily thought of as a supportive special weapon, the Big Bubbler is available on a few aggressive, frontline weapons, such as the Blaster and the Splat Roller. While their users might not have as many opportunities as a support player to use Big Bubbler (due to their reduced turfing ability and higher tendency to get splatted), they can still use it with great effect whenever an opportunity arises:[1]

Conversely, a support player should seek out good opportunities to deploy a Big Bubbler around a frontline or backline teammate who is in a strong position:

While the Big Bubbler can help any aggressive player remain in their opponents' territory, it cannot fully replace a true aggressive special weapon in a team composition, and it does nothing to displace opponents:

An opponent's Big Bubbler can be a formidable obstacle if placed in front of the objective or just outside your team's base. Otherwise, an opponent might use it to protect a position with great vantage points for their anchor, making them difficult to dislodge. Pushing back an opposing team using Big Bubbler can involve either breaking through it or working around it: