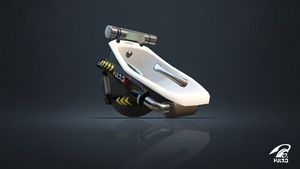 The Bloblobber Deco is the only variant of the Bloblobber. The weapon itself with its long range is great for the anchor role while the kit can also help provide a supportive role.

The Bloblobber Deco is a long-ranged weapon with high damage, making it a quick splat if all bubbles land.

The Bloblobber Deco is best paired with slayers with short range like Kensa Splattershot or Clear Dapple Dualies to help deal pressure and maybe deal damage.

The Bloblobber Deco's lack of lethal bombs – particularly either Splat or Suction Bombs – generally necessitates its user's teammates to equip weapons that include them. Lethal bombs provide their user's team a couple advantages over another team that has no lethal bombs in its composition:

Ever since its introduction in Version 4.3.0, Bomb Defense Up DX will not only reduce the damage taken from opposing sub and special weapons that are not one-hit-splat but will also reduce the duration of the tracking effects of certain opponent's sub and special weapons, such as Point Sensors and Ink Mines, allowing the user of this ability to evade detection more easily. Because the Bloblobber Deco has such a low strafing speed, it’s likely to get caught in the splash damage radius of most bombs, and so its user can greatly benefit from reducing the damage taken from said bombs. Just three ability points, or one sub, offer plenty of utility:

The Bloblobber Deco consumes 8% of its ink per slosh, which uses up its ink tank quickly. Ink Saver (Main) can be used to help maintain ink levels:

The Bloblobber Deco consumes ink rapidly, and Sprinklers use 60% of the ink tank. A Bloblobber Deco user will benefit a lot from Last-Ditch Effort to allow themselves to continually turf with a reduced risk of being caught without ink.

This ability will increase the weapon’s ink coverage, which makes the paint of the Bloblobber Deco’s projectiles more consistent. This improvement is quite helpful, as it increases the user’s efficiency when turfing and can contribute to the charging of your special. [7]

The blobs from the Bloblobber Deco travel far and remain on the stage for a decent period of time. Opponents will often run into stray blobs without getting splatted, or a volley of blobs directed at an opponent will only land one hit. Thermal Ink can make use of this and locate opponents who only mostly avoid or get randomly hit by the weapon’s blobs.