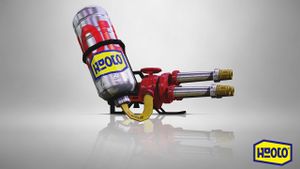 Compared to the Splatoon 2 version, the Custom Hydra Splatling works worse than in Splatoon 2.

The Custom Hydra Splatling's lack of lethal bombs – particularly either Splat or Suction Bombs – generally necessitates its user's teammates to equip weapons that include them. Lethal bombs provide their user's team a couple advantages over another team that has no lethal bombs in its composition:

Being a splatling, the Custom Hydra Splatling will often come into contact with enemy ink on the ground while strafing, which can cripple its mobility. Ink Resistance Up will allow for better mobility in these situations.

Being a ink-hungry weapon, the user will likely find themselves out of ink often. Ink Saver (Main) will allow the user to save more ink and reduce the chance of being caught without ink. Like the original Hydra Splatling, the Custom Hydra Splatling is a longer-ranged, higher-damaging version of the Heavy Splatling — albeit at the cost of lower mobility and a longer charge time. Unlike the Vanilla variant, this variant has a kit that is more consistent with its role as an anchor. However, its lack of mobility and long charge time makes its user very dependent on their team composition for protection and support.[3]

The long range and low mobility of the Custom Hydra Splatling make it suited as an anchor's weapon:

A Custom Hydra Splatling user has two types of opponents they have to be most wary of:

The Custom Hydra Splatling has great range and powerful damage but is lacks mobility while moving or firing and has trouble leading pushes and pursuing opponents. Be sure to include some mobile, shorter-ranged weapons in the team composition. Otherwise, a team with too many longer-ranged weapons will have major drawbacks:[8]

Ink Mines cannot be thrown and cannot inflict lethal damage, making them less versatile than most bombs. Therefore, it is advised for at least one teammate of a Custom Hydra Splatling user to have lethal bombs in their kit. Splat or Suction Bombs provide its user's team many advantages over another team that has no lethal bombs in its composition:[8]

An opposing Custom Hydra Splatling user who is fully charged and well-positioned – behind cover and with a great vantage point[2] – can be a formidable force; most attempts to directly confront this opponent often result in a one-way-ticket back to the spawn point.

Ever since its introduction in Version 4.3.0, Bomb Defense Up DX will not only reduce the damage taken from opposing sub and special weapons that are not one-hit-splat but will also reduce the duration of the tracking effects of certain opponent's sub and special weapons, such as Point Sensors and Ink Mines, allowing the user of this ability to evade detection more easily. Since the Custom Hydra Splatling is prone to being attacked by bombs and Tenta Missiles due to it being an anchor, having this ability is great for improving its survivability - especially considering how slow it is. Just three ability points, or one sub, offer plenty of utility:[9][10]

Being a splatling, a Hydra user is expected to come in contact with the opponent's ink on various surfaces, which can both be damaging and reduce mobility. Ink Resistance Up not only partially offsets the reduction in mobility but also delays the damage taken from contact with opposing ink:[9][10]

The Custom Hydra Splatling is one of few weapons that receive a boosted effect from Ink Saver (Main). One sub ability will let the user complete a third full charge at normal speed without running out of ink.

The primary use of Main Power Up is to let partial charges splat opponents in three shots instead of four when the opponent touches enemy ink.

Quick Super Jump decreases both the "charge" time before and the travel time of a Super Jump, helping its user escape unfavorable situations more quickly. There are some situations where a Hydra will have to jump back to spawn to avoid getting splatted and preserve its expensive Ink Armor, and Quick Super Jump will help in this regard.[9][10]

Run Speed Up is the bread and butter of most splatling builds, and the Custom Hydra Splatling is no different. This ability will help the weapon's strafing speed, which is valuable for doing standard splatling actions such as charging up behind a wall and peeking out faster to fire.

Due to being a heavyweight weapon, the Custom Hydra Splatling inherently slows the swim speed of its user. Swim Speed Up enables them to more quickly return to the site of engagement, more quickly respond to an opponents' push, and better keep their distance from aggressive opponents.[9]