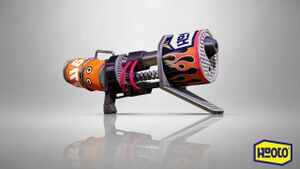 The Custom Range Blaster is widely regarded by the competitive community as one of the best weapons in the first Splatoon. In a game where the meta revolves around aggression, this weapon certainly has the capabilities of doing so with its high splatting power, bomb combos, and Kraken special weapon.

The Custom Range Blaster is a pure slayer weapon:

Splat Bombs are a versatile sub weapon that synergize well with the Custom Range Blaster:

Unless a Custom Range Blaster user is on an extended splatting streak, they can expect to get splatted often. When equipped, Comeback grants 12 ability points of six different stackable abilities for twenty seconds after respawning from getting splatted by an opponent:

Aside from Run Speed Up (unless on certain stages like Hammerhead Bridge), all of these abilities benefit a Custom Range Blaster, making it more ink efficient, move faster (as well as boosting the speed of the Kraken), and pairs well with the weapon's light special depletion to obtain Kraken faster on respawn.

Damage Up will improve the consistency of the Custom Range Blaster's Splat Bomb combos.[2] 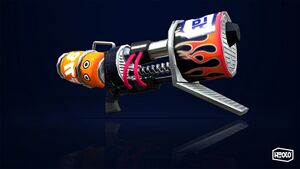 The Custom Range Blaster in Splatoon 2 is not used as much compared to the first game due to it being severely outclassed by other weapons, and is even considered by competitive players to be one of the worst weapons in the game - quite a downfall from its appearance in the first Splatoon.[3] It loses the chance for bomb combos and aggressiveness now has a more supportive loadout, making it less popular among other weapons. It is usually bested by its Grim variant, which has a more aggressive kit.

Compared to its Splatoon incarnation, the Custom Range Blaster functions similarly but with added drawbacks:

Because blasters are generally poor at turfing, their users will have to rely on their teammates to maintain map control. Not having enough turfing ability – usually from having too many blasters and chargers – presents its own set of problems:[7]

While the Custom Range Blaster's Curling Bombs are invaluable for mobility and confirming splats, they lack certain advantages offered by lethal bombs — particularly either Splat or Suction Bombs, which provide their user's team a couple advantages over another team that has no lethal bombs in its composition:[7]

To address these first two issues, a Custom Range Blaster user is best accompanied with a teammate whose weapon has both efficient turfing and lethal bombs, such as the Splattershot Jr. or the N-ZAP '85. This ensures that the Grim Range Blaster user will have lethal bomb support and turf to retreat to whenever necessary.

Ever since its introduction in Version 4.3.0, Bomb Defense Up DX will not only reduce the damage taken from opposing sub and special weapons that are not one-hit-splat but will also reduce the duration of the tracking effects of certain opponent's sub and special weapons, such as Point Sensors and Ink Mines, allowing the user of this ability to evade detection more easily. Because the Custom Range Blaster is a powerful mid-ranged weapon, its user can greatly benefit from reducing the damage taken from their opponents' bombs. Just three ability points, or one sub, offer plenty of utility:[8][9]

The Custom Range Blaster uses a large portion of the ink tank per shot. Ink Saver (Main) not only allows it to fire more shots per ink tank.

Main Power Up increases accuracy while in the air. The Custom Range Blaster can greatly benefit from increased accuracy to allow shots to deal splash damage to opponents more often.