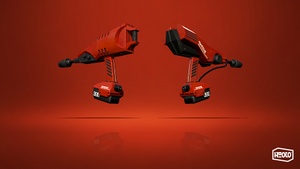 The Dualie Squelchers are the successor to the Dual Squelcher in the first Splatoon. What was once a mid-ranged shooter are now a versatile pair of mid-ranged dualies, boasting the longest range out of its class and providing a major boost in mobility. Compared to its Custom variant, the vanilla Dualie Squelchers have a more supportive kit due to its lack of a lethal bomb; however, this weapon can still play a slayer role effectively.

The Dualie Squelchers arguably have the best mobility of the other weapons in the game thanks to its dodge rolls.[3]

This weapon accommodates both a slayer or supportive playstyle:

The tracking sub weapon, Point Sensor, isn't nearly as useful when compared to a lethal bomb. However, its relatively low ink consumption of 45% allows it to be used more often than the Splat Bomb on the Custom kit. When combined with Tenta Missiles, this allows the Dualie Squelchers to be something of a living Echolocator:[5]

The Dualie Squelchers are very versatile and can slot into many team compositions. However, sometimes they struggle to fight, meaning that they should be paired with a more traditional slayer, such as any of the Splattershots.[8]

Point Sensors lack certain advantages offered by lethal bombs — particularly either Splat or Suction Bombs, which provide their user's team a couple advantages over another team that has no lethal bombs in its composition:[9]

While having multiple players on the same team launching Tenta Missiles might seem like a fun and easy means to cause opponents to scramble for cover, having too many players equipped with them – no more than one or two – can reduce the effectiveness of a team composition:[9]

A Dualie Squelchers user in a slayer role generally gets close enough to the opponent and their bombs. Ever since its introduction in Version 4.3.0, Bomb Defense Up DX will not only reduce the damage taken from opposing sub and special weapons that are not one-hit-splat but will also reduce the duration of the tracking effects of certain opponent's sub and special weapons, such as Point Sensors and Ink Mines, allowing the user of this ability to evade detection more easily. Just three ability points, or one sub, offer plenty of utility:[11][12]

Any good slayer like a Dualie Squelchers user is expected to come in contact with the opponent's ink on various surfaces, which can both be damaging and reduce mobility. Ink Resistance Up not only partially offsets the reduction in mobility but also delays the damage taken from contact with opposing ink.[11][12]

A generally good ability for any Dualie Squelchers build, as rolling will deplete the ink tank quickly.

A Dualie Squelchers user benefits from both the overall reduced ink consumption and quicker ink recovery, allowing them to more freely use either the main weapon during either a crucial defensive stand or a late attempt to reclaim the lead.[11] However, when running this ability, the user will have to run two mains and eight subs of Main Power Up to do 33.2 damage.

Main Power Up will increase the damage output for the Dualie Squelchers up to 20%, opening up its slayer capabilities.

The Dualie Squelchers upon release were met with lukewarm reception. At the time of its release, it did not have its unique dodge roll without endlag until version 1.4.0. However, even when it received this buff that would become its defining trait, competitive players such as Sendou still placed the weapon on the lower end of his tier list as it had Tenta Missiles, considered by competitive players as one of the worst specials in the game at the time.[15][16] Views on the weapon largely stayed the same throughout version 3.0.0, with Sorin also placing the weapon low on his tier list.[17]

Opinions on the weapon shifted as the Custom Dualie Squelchers were released, allowing it to be more effective in its support role. It saw representation at many tournaments throughout 2018 and even 2019, such as the Splatoon 2 World Championship 2019 hosted by Nintendo.[18] However, the vanilla Dualie Squelchers were still largely seen as inferior to its Custom variant in the competitive scene, with Sorin placing it a tier lower than the Custom variant on his version 4.0.0 tier list and Chara even placing the weapon in the bottom tier for his list, with the Custom variant in the high tiers.[19][20] Although Tenta Missiles received several buffs by this time, the only weapon with Tenta Missiles that became noticeably popular was the Mini Splatling.[21]

However, it was also around this time that the ability to jump immediately after performing a roll was discovered, allowing it a decent mix-up option in combat. The weapon surged in popularity somewhere around version 5.0.0. Even after its ink efficiency and bullet hitbox nerfs in version 5.3.0, Chara still placed the weapon in the top tiers for his tier list due to the weapon's mobility, range, and turfing ability. Once again, the vanilla variant was placed beneath the Custom one due to its kit.[3] As of version 5.4.0, the weapon has been on a decline due to it struggling to fight some of the current top weapons in the game.[8] For the first time, the vanilla Dualie Squelchers were placed above the Custom Dualie Squelchers, most likely due to a nerf in 5.4.0 that increased its special gauge for Ink Storm to 220p. At version 5.5.0, the Dualie Squelchers were put higher than its Custom variant, as the weapon shares the same strengths and can spam Tenta Missiles.[22]

By the end of the game's lifespan, while the weapon was still seen as strong, other easier options meant it saw little use outside of players who mained the weapon. 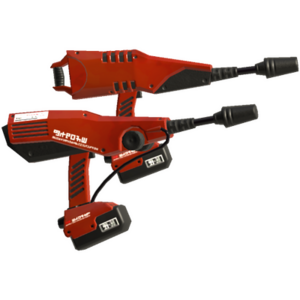 The Dualie Squelchers return in Splatoon 3 with a kit echoing that of its predecessor, the Dual Squelcher. Due to the loss of Main Power Up between games to increase its damage, the weapon now finds itself in a supportive role due to its decent turfing and having gear space to poke with bombs more often.