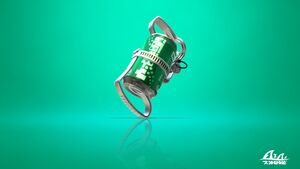 The Fizzy Bomb debuted in the Version 4.1.0 update, becoming the first sub weapon to have been added post-release in the Splatoon series. While its explosion is not lethal, the Fizzy Bomb can be charged to detonate up to three times for a potentially lethal combo. Its ability to pressure opponents from long range and turf lanes for both movement and farm special weapons makes it arguably the most versatile sub weapon in all of Splatoon 2.

To be fully effective, a Fizzy Bomb needs to be fully charged:

A Fizzy Bomb provides plenty of utility for its user:

Despite its many advantages, the Fizzy Bomb still has a couple weaknesses:

While its explosion is not lethal, the Fizzy Bomb is still treated as a lethal bomb, due to its potential for lethal combos when fully charged. Lethal Bombs, which also include Splat and Suction Bombs, provide its user's team many advantages over another team that has no lethal bombs in its composition:[7]

The chip damage and long range of Fizzy Bombs assist their user in providing support fire for a teammate who is battling an opponent. If you see a teammate engaged with an opponent, help them out by tossing some charged Fizzy Bombs their way.

Fizzy Bombs in the hands of an opponent grants them the ability to contest turf, pressure your team, and inflict chip damage — all from a relatively safe distance. Fortunately, only four weapons in Splatoon 2 – the Kensa Luna Blaster, the Bamboozler 14 Mk III, the Kensa Sloshing Machine, and the Kensa Glooga Dualies – have them in their kits, so remembering and recognizing them can help prepare you to deal with them.