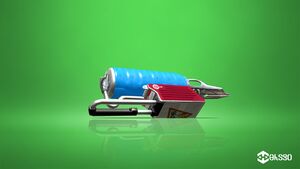 Like the Flingza Roller, the Foil Flingza Roller combines a long-range vertical swing akin to that of the Dynamo Roller with a short-range horizontal swing similar to that of the Splat Roller. However, the cost of this flexibility is a lack of damage potential, meaning that, just like its Vanilla variant, it needs to be played differently than other rollers.

The Foil Flingza Roller's traits and kit make it suitable for a support role:

While having multiple players on the same team launching Tenta Missiles might seem like a fun and easy means to cause opponents to scramble for cover, having too many players equipped with them – no more than one or two – can reduce the effectiveness of a team composition:[9]

The Foil Flingza Roller uses a large portion of the ink tank per swing. Ink Saver (Main) not only allows its user to swing more often per ink tank but also conserves ink for Suction Bomb use.[11]

Ink Saver (Sub) allows more frequent use of Suction Bombs and saves ink for the main weapon after each Suction Bomb used. Having the ability to use Suction Bombs more often allows a Foil Flingza Roller user to more reliably slow the opponents' push.[11] For example, constantly tossing Suction Bombs onto the Tower can force opponents off of it, delaying their Tower push.

A Foil Flingza Roller user benefits from both the overall reduced ink consumption and quicker ink recovery, allowing them to more freely use either the main weapon or Suction Bombs during either a crucial defensive stand or a late attempt to reclaim the lead.[11]

Introduced in Version 4.3.0, Main Power Up increases the damage output of the Foil Flingza Roller by up to 15%. While the Foil Flingza Roller does not benefit as greatly from Main Power Up as do some other weapons — notably the Splattershot Pro and its variants, it can improve both its damage consistency and effective ranges with a little investment in this ability.[11]

Quick Super Jump decreases both the "charge" time before and the travel time of a Super Jump. A Foil Flingza Roller user will benefit since Quick Super Jump allows them to escape unfavorable situations more easily to preserve special gauge progress.[11][12]

Special Charge Up accelerates building up the special gauge for Tenta Missiles. As one of the quickest weapons at farming Tenta Missiles, constantly having them available to pressure opponents ensures more successful pushes and counter-pushes.[11]