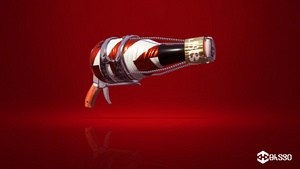 Like the Squeezer, the Foil Squeezer has two modes of fire: a powerful, long-ranged, semiautomatic mode and a short-ranged, fully automatic mode intended for turfing. While it takes a good amount of practice to get used to its mechanics, its user will be rewarded with the ability to quickly splat opponents from afar. Unlike the Vanilla variant, this weapon has a more versatile kit, providing its user the means to either poke at their opponents or push their way back into a contested area.

The Foil Squeezer's has traits of both a slayer's and support weapon:

The Splat Bomb is a powerful, versatile sub weapon with a variety of purposes suited for any player:

The Foil Squeezer's perfect accuracy, high DPS, and long range allow its user to maintain pressure, provide support fire, and quickly splat opponents from afar. However, its slow firing rate and poor ink efficiency leave its user vulnerable at close range. Therefore, it is generally advised not to add more than one other long-ranged weapon to a team composition for a few reasons:[12]

While the Foil Squeezer is not particularly poor at turfing, it is still outclassed in this role by traditional support weapons, such as the N-ZAP '85 or the Splattershot Jr.. A team whose composition lacks sufficient turfing ability will struggle to maintain map control, which can make games seem like a constant uphill battle:[12]

Due to its aforementioned strengths and weaknesses, a Foil Squeezer user would both complement and be complemented by any teammate using an ink efficient, rapid-firing weapon:[13]

Bubble Blower is great for either initiating a push into contested territory or repelling the opponents' push. However, it is neither a very reliable means of turfing territory – such as a Splat Zone – nor always a dependable means to splat opponents — particularly ones with longer-ranged weapons. Therefore, it would be redundant to have two Bubble Blower users in a team composition:[12]

Ever since its introduction in Version 4.3.0, Bomb Defense Up DX will not only reduce the damage taken from opposing sub and special weapons that are not one-hit-splat but will also reduce the duration of the tracking effects of certain opponent's sub and special weapons, such as Point Sensors and Ink Mines, allowing the user of this ability to evade detection more easily. While this is a useful ability for any player, a Foil Squeezer user – who is often a target of their opponents' bombs and Tenta Missiles to counter their Bubble Blower – would definitely want it as part of their gear. Just three ability points, or one sub, offer plenty of utility:[15][16][17][18]

While a Foil Squeezer user generally remains a further distance from their opponents then do users of most other weapons, they can still expect to come in contact with the opponent's ink on various surfaces – usually from opposing bombs and Tenta Missiles – which can both be damaging and reduce mobility. Ink Resistance Up not only partially offsets the reduction in mobility but also delays the damage taken from contact with opposing ink.[16][17][18]

The low ink efficiency of the Foil Squeezer limits the opportunities its user can use Splat Bombs. Ink Saver (Sub) reduces the ink consumption per Splat Bomb, which enables its user to throw Splat Bombs more often and conserves ink for the main weapon.[17]

Last-Ditch Effort is a headgear-exclusive ability that, under specific conditions, grants its user 1 to 24 ability points each of the following abilities:

Because they have both an ink-thirsty main weapon and a spammable sub weapon, a Foil Squeezer user stands to greatly benefit from both the overall reduced ink consumption and increased ink recovery,[17][20] making Last-Ditch Effort used in over 54% of 602 Foil Squeezer builds submitted to Sendou.ink.[21]

These benefits, particularly the former, are likely the reason why over 96% of of 602 Foil Squeezer builds submitted to Sendou.ink include Object Shredder.[21]

Quick Super Jump decreases both the "charge" time before and the travel time of a Super Jump, helping its user escape unfavorable situations more quickly. While a Foil Squeezer player matches up well in most one-on-one battles, there will be situations in which quickly retreating and preserving precious special gauge progress would be wiser than risking getting splatted.[16][17][18]

Special Power Up increases bubbles' size upon launching as well as their blast radius. The former trait enables bubbles to withstand more damage from the opponents before defusing, providing their user and their teammates a longer duration of protection.[17] Foil Squeezer builds submitted to Sendou.ink tend to have 9-19 ability points of Special Power Up.[21]

While Swim Speed Up can enable a short-ranged weapon user to close the distance towards their opponents, conversely, it can also help a Foil Squeezer user to maintain a safe distance from their opponents or escape unfavorable situations, as well as more quickly respond to an opponents' push.[17]

The Foil Squeezer upon release wouldn't be as strong. The main weapon itself was not as strong so the weapon was not used quite often. The weapon would be ranked moderately high by competitive player Sorin because of the weapon's potential.[24] However at Version 4.0.0 the weapon would drop.[25] The weapon at Version 4.6.0 would be ranked at a similar spot than before. The weapon itself while in the same tier, is considered better than the Forge Splattershot Pro because of its slightly better range and being less gear dependent.[26]