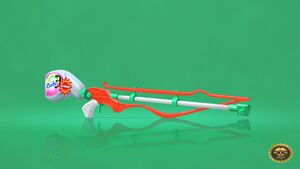 The Fresh Squiffer, as well as its Vanilla and New variants, lack range, but have a quick charge time and can still splat an opponent in one fully charged shot. Compared to its other variants, the Fresh Squiffer's kit leans much farther into its aggressive capabilities.

Despite it being a charger, the Fresh Squiffer can operate as a slayer's weapon:

The Fresh Squiffer has a couple weaknesses:

If piloted properly, the Inkjet can pressure opponents – particularly anchors – more directly than most other slayer's special weapons, such as Baller or Ultra Stamp:

The Fresh Squiffer's range and one-shot splat potential allow its user to maintain spatial control and pressure without having to thoroughly ink large swaths of turf. However, its requirement to charge before firing leaves its user vulnerable at close range. Therefore, it is generally advised not to add more than one other long-ranged weapon to a team composition for a few reasons:[11]

While quicker and more efficient at turfing than most other chargers, the Fresh Squiffer still turfs less efficiently than many typical slayer weapons, such as the Splash-o-matic and the Splattershot. A team whose composition lacks sufficient turfing ability will struggle to maintain map control, which can make games seem like a constant uphill battle:[11]

The Inkjet is particularly vulnerable while flying, due to its larger hitbox and slow air speed. Having a teammate with Ink Armor will increase the Inkjet's survivability and allow them to play more aggressively.

Given the Fresh Squiffer's unique set of strengths and weaknesses, its user will benefit from having teammates with mobile, short-ranged weapons; quick-turfing weapons; and Ink Armors:[12]

A Fresh Squiffer user in a slayer role generally gets close enough to the opponent and their bombs. Ever since its introduction in Version 4.3.0, Bomb Defense Up DX will not only reduce the damage taken from opposing sub and special weapons that are not one-hit-splat but will also reduce the duration of the tracking effects of certain opponent's sub and special weapons, such as Point Sensors and Ink Mines, allowing the user of this ability to evade detection more easily. Just three ability points, or one sub, offer plenty of utility:[13][14]

Any good slayer like a Fresh Squiffer user is expected to come in contact with the opponent's ink on various surfaces, which can both be damaging and reduce mobility. Ink Resistance Up not only partially offsets the reduction in mobility but also delays the damage taken from contact with opposing ink.[13][14]

Main Power Up increases the range and turfing ability for the Fresh Squiffer (up to 8.9% and 24%, respectively), mitigating some of its weaknesses. It's recommended to always run a good amount of Main Power Up, in order to increase the weapon's range and therefore its ability to anchor.

Quick Super Jump decreases both the "charge" time before and the travel time of a Super Jump. Fresh Squiffer users can use Quick Super Jump to both return to the front lines more quickly after getting splatted and escape unfavorable situations more easily in order to stay alive and preserve special gauge progress.[13][14]

Super Jumping to a teammate after respawning carries the risk of getting splatted upon landing, due to the appearance of a Super Jump indicator. When equipped, Stealth Jump better covers this indicator from long-distance opponents, allowing its user to more safely return to the front lines and maintain pressure on the opponent. Unlike Drop Roller, Stealth Jump does not apply on Inkjet recalls.

Drop roller allows its user to potentially roll away from enemy fire after Super Jumping, including notably after the Inkjet has expired. It also gives them a mobility boost for 3 seconds in the form of 10 AP of Run Speed Up, Swim Speed Up, and Ink Resistance Up. Drop Roller is not quite as effective as Stealth Jump at protecting Super Jump landing points, however.

A self-explanatory ability, Swim Speed Up enables an already mobile Fresh Squiffer user to more rapidly close the distance towards an opponent, more quickly respond to an opponents' push, or even escape unfavorable situations.