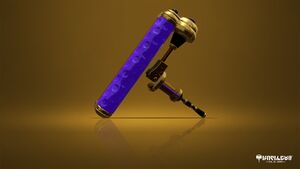 Like the original Dynamo Roller, the Gold Dynamo Roller takes plenty of time and practice to learn and get acclimated to, due to its slow mobility and firing rate, but can be an intimidating and dominating force when fully mastered. Compared to the other two variants, its kit allows its user to maintain control of highly contested areas of a stage, such as a Splat Zone.

While the turfing ability and kit of the Gold Dynamo Roller suggests it to be a support weapon, its long range allows it to find success as an anchor as well:

As already mentioned, the Gold Dynamo Roller has a few glaring drawbacks, including its aforementioned lack of mobility and slow fire rate:

The Splat Bomb, a versatile sub weapon in many kits, is the Gold Dynamo Roller user's quickest option in close- to medium-ranged combat:

The Gold Dynamo Roller has great range and thorough turfing but is lacks mobility while moving or firing and has trouble leading pushes and pursuing opponents. Be sure to include some mobile, shorter-ranged weapons in the team composition. Otherwise, a team with too many longer-ranged weapons will have major drawbacks:[11]

Multiple Ink Armors used by the same team do not stack. Therefore, it would be redundant for a team to have more than two Ink Armor users.[11]

Because bombs are a good countermeasure against an opposing Dynamo user, a Gold Dynamo Roller user can expect to have the opponents' bombs thrown their way. Ever since its introduction in Version 4.3.0, Bomb Defense Up DX will not only reduce the damage taken from opposing sub and special weapons that are not one-hit-splat but will also reduce the duration of the tracking effects of certain opponent's sub and special weapons, such as Point Sensors and Ink Mines, allowing the user of this ability to evade detection more easily. Just three ability points, or one sub, offer plenty of utility:[12][13]

Even though a Gold Dynamo Roller user generally keeps their distance from opponents, they can still expect to come in contact with opposing ink on various surfaces, particularly while swimming from one location to another. While in contact with the opponent's ink, Ink Resistance Up both delays the damage taken and partially offsets reduction in running speed and jumping height — including while swinging the weapon.[12][13][14]

Reducing the Gold Dynamo Roller's high ink consumption allows its user to swing it more often before having to refill their ink tank. Not only can this be accomplished this with Ink Saver (Main), it is also one of nineteen weapons in Splatoon 2 that receives a stronger effect from this ability. For example, just three ability points, or one sub, allows a Gold Dynamo Roller user to swing their main weapon with full damage six times instead of the default five. However, it would be wise to invest even more ability points into Ink Saver (Main) to enable more use of the main weapon:[12]

A Gold Dynamo Roller user can potentially benefit greatly from Last-Ditch Effort, particularly from Ink Saver (Main) and Ink Recovery Up, allowing them to more freely use the main weapon during the final moments of a battle or whenever the opposing team has decreased their count a substantial amount.[12] However, a Gold Dynamo Roller user equipped with at least two mains of Ink Saver (Main) will have to decide whether it is worthwhile to sacrifice one full swing of their main weapon from the start of the battle for the possible trade-off of receiving two extra swings – one more than with another Ink Saver (Main) – late in the battle.

Main Power Up increases damage to rollers by up to 15%, slightly increasing the lethal and two-hit ranges of the Gold Dynamo Roller, making it more consistent at inflicting damage.[12]

Quick Super Jump decreases both the "charge" time before and the travel time of a Super Jump, allowing its user to escape more quickly. A Gold Dynamo Roller user struggles to escape from rushing opponents and would also have an incentive to maintain valuable special gauge progress for their Ink Armor.[12][13]

Special Charge Up accelerates building up the special gauge for Ink Armor. Since farming Ink Armor is one of a few roles of the Gold Dynamo Roller, constantly having Ink Armor available for teammates ensures more successful pushes and counter-pushes.[12]

Super Jumping to a teammate after respawning carries the risk of getting splatted upon landing, due to the appearance of a Super Jump indicator. A Dynamo Roller is particularly vulnerable upon landing and is not fast enough to splat campers and survive, unlike a Carbon or Splat Roller. When equipped, Stealth Jump better covers this indicator from long-distance opponents, allowing a Gold Dynamo Roller user to more safely return to the front lines and more quickly maintain turfing pressure on and zone out the opponent.[12]

Due to being a heavyweight weapon, the Gold Dynamo Roller inherently slows the swim speed of its user. Swim Speed Up enables them to more quickly return to the site of engagement, more quickly respond to an opponents' push, and better keep their distance from aggressive opponents.[12]

Not recommended. The weapon's white ink frames after attacking reduces the effectiveness of this ability, and is generally outclassed by Last-Ditch Effort.