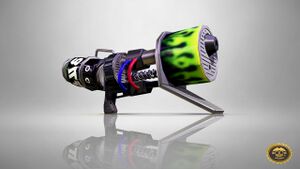 The Grim Range Blaster shares the same strengths as that of the Vanilla and Custom variant. While the Burst Bombs are more versatile for combos and mobility, Killer Wail is much more situational than the Kraken, making the Custom variant more popular. It still holds solid niches on certain maps, similar to how the .52 Gal does.[1]

Killer Wail is a versatile special that the user will often have due to its cheap cost of 160p, helping a Grim Range Blaster user, who cannot turf well. 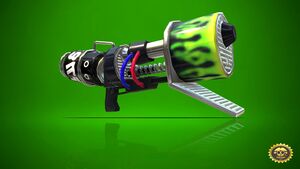 The Grim Range Blaster, like its Vanilla and Custom variants, is a medium-ranged blaster with good zoning and high splatting potential, and its overall kit complements the main weapon even better than those of the other variants. However, like the other variants, its slow firing rate, poor turfing, and high dependence on landing splats means that it will be at a big disadvantage if its user's team ever loses map control.

The Grim Range Blaster can flex between the slayer and support roles:

Because blasters are generally poor at turfing, their users will have to rely on their teammates to maintain map control. Not having enough turfing ability – usually from having too many blasters and chargers – presents its own set of problems:[14]

While the Grim Range Blaster's Burst Bombs are invaluable for mobility and confirming splats, they lack certain advantages offered by lethal bombs — particularly either Splat or Suction Bombs, which provide their user's team a couple advantages over another team that has no lethal bombs in its composition:[14]

As a heavy consumer of ink, the Grim Range Blaster can be fired more often if its user can refill their ink tank at a faster rate. A valuable utility ability for almost any weapon, Ink Recovery Up is invaluable for a Grim Range Blaster user.[15][16]

The Grim Range Blaster uses a large portion of the ink tank per shot. Ink Saver (Main) not only allows it to fire more shots per ink tank but also conserves ink for Burst Bomb use.[15]

Ink Saver (Sub) allows more frequent use of Burst Bombs and conserves more ink for the main weapon. Because Burst Bombs play a large role for a Grim Range Blaster user, conserving ink per Burst Bomb use will be beneficial.[15]

Quick Respawn shortens respawn time after getting splatted (under specific conditions). Like other slayer's weapons, the Grim Range Blaster benefits from abilities that promote aggressive play, such as Quick Respawn.

Stealth Jump hides its user's Super Jump landing marker from opponents (and allies) who are not too close to it — about three tile lengths in the middle of Inkblot Art Academy.[20] This encourages its user to Super Jump back to the frontlines more often.

Because a Grim Range Blaster user has trouble turfing and is less mobile as a result, they can greatly benefit from Swim Speed Up, which enables its user to better maintain an optimal distance from an opponent, more quickly respond to an opponents' push, or even escape unfavorable situations.