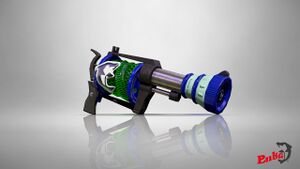 The H-3 Nozzlenose D has many differences than its Splatoon 2 appearance:

Point Sensors lack certain advantages offered by lethal bombs — particularly either Splat or Suction Bombs, which provide their user's team a couple advantages over another team that has no lethal bombs in its composition:[1]

Inkzooka while useful for splatting, may not be as effective if having more than two players on a team with it for a few reasons: 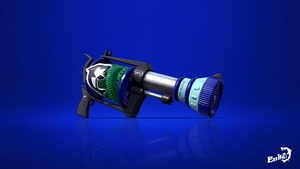 The H-3 Nozzlenose D is a medium-ranged weapon with a diverse array of abilities. While it shares the same sub and special weapons with the N-ZAP '85, its burst fire and lower mobility and ink efficiency require it to be played differently.

The H-3 Nozzlenose D is capable of being either a slayer or support weapon, depending on its gear abilities.

The H-3 Nozzlenose D is also a very capable support weapon because of its range and turf coverage:

As a burst-fire shooter, the H-3 Nozzlenose D requires a higher level of skill than an automatic shooter to be effective:

The primary weaknesses of the H-3 Nozzlenose D are its poor ink efficiency, slow mobility while firing, and long lag between firing bursts:

The H-3 Nozzlenose D has good range and thorough turfing but is not very mobile while firing and is vulnerable up close due to its long lag in between firing bursts. Be sure to include some shorter-ranged weapons in the team composition. Otherwise, a team with too many longer-ranged weapons will have some glaring drawbacks:[1]

Therefore, the H-3 Nozzlenose D makes a good complement to – and is well complemented by – a more rapid firing slayer's or support weapon, such as a Splattershot, an N-ZAP '85, or a Splash-o-matic.

Multiple Ink Armors used by the same team do not stack. Therefore, it would be redundant for a team to have more than two Ink Armor users.[1]

Ever since its introduction in Version 4.3.0, Bomb Defense Up DX will not only reduce the damage taken from opposing sub and special weapons that are not one-hit-splat but will also reduce the duration of the tracking effects of certain opponent's sub and special weapons, such as Point Sensors and Ink Mines, allowing the user of this ability to evade detection more easily. While this is a useful ability for almost any player, it is particularly valuable for an H-3 Nozzlenose D who plays as a slayer. Just three ability points, or one sub, offer plenty of utility:[10][11]

An H-3 Nozzlenose D user playing as a slayer is expected to come in contact with the opponent's ink on various surfaces, which can both be damaging and reduce mobility. Ink Resistance Up not only partially offsets the reduction in mobility but also delays the damage taken from contact with opposing ink.[10][11]

Ink Saver (Sub) allows more frequent use of Suction Bombs and saves ink for the main weapon after each Suction Bomb used. Having the ability to use Suction Bombs more often allows a supportive H-3 Nozzlenose D user to more reliably slow the opponents' push.[10] For example, constantly tossing Suction Bombs onto the Tower can force opponents off of it, delaying their Tower push.

The H-3 Nozzlenose D consumes ink rapidly, and Suction Bombs are also heavily depended upon since Ink Armor is not as farmable as with other Ink Armor-based weapons. A supportive H-3 Nozzlenose D user can greatly benefit from both the overall reduced ink consumption and increased ink recovery.[10]

Quick Super Jump decreases both the "charge" time before and the travel time of a Super Jump, helping its user escape unfavorable situations more quickly. While an H-3 Nozzlenose D player can fight in one-on-one battles very effectively, there will still be situations where staying to fight will not be a wise decision and preserving precious special gauge progress is more important.[10][11]