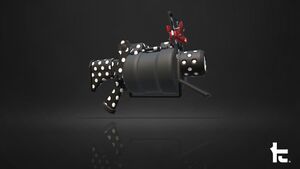 Introduced in the Version 4.3.0 update, the Kensa .52 Gal – like its previous Vanilla and Deco variants – has a threatening two-shot splat and – ever since the Version 5.4.0 update – good turfing ability, which is augmented by its range, which exceeds that of other short-ranged shooters. Unlike its other variants, the Kensa .52 Gal has a kit that emphasizes survivability, zoning, and area denial.

While the Kensa .52 Gal's high damage rate allows it to be a competent slayer's weapon, its kit makes it an even better tank skirmisher and support weapon:

However, The Kensa .52 Gal has a few notable drawbacks:

The Kensa .52 Gal's lack of lethal bombs – particularly either Splat or Suction Bombs – generally necessitates its user's teammates to equip weapons that include them. Lethal bombs provide their user's team a couple advantages over another team that has no lethal bombs in its composition:[5][8]

While Booyah Bomb is capable of both splatting opponents and turfing surfaces it comes in contact with, it is not necessarily the best special weapon at either task. Therefore, it is advised to have other special weapons available to fill those specific roles whenever necessary, as having too many users of Booyah Bomb in a team composition will limit a team's arsenal of weapons:[8]

Given the Kensa .52 Gal's specific set of strengths (zoning, turfing, Booyah Bomb farming) and weaknesses (lack of bombs, relatively short range), its user would benefit if their team composition included at least one mobile slayer whose kit includes bombs (e.g., Neo Splash-o-matic or Kensa Sloshing Machine) and at least one longer-ranged weapon user (e.g., Bamboozler 14 Mk I or Nautilus 79). The former can finish off confrontations initiated by the Kensa .52 Gal user while the latter can help watch the flanks to prevent opponents from attempting to work around the Kensa .52 Gal user's Splash Wall.[10]

While thought of as a personal protection aid, a Splash Wall can also provide protection for teammates:

When used properly, a Kensa .52 Gal can make its user an nearly immovable obstacle for their opponents, due to its kit and zoning capability. Specific strategies, tactics, weapons, and abilities are required — not so much to eliminate an opposing Kensa .52 Gal user but to work around their strengths and expose its few weaknesses.

Ever since its introduction in Version 4.3.0, Bomb Defense Up DX will not only reduce the damage taken from opposing sub and special weapons that are not one-hit-splat but will also reduce the duration of the tracking effects of certain opponent's sub and special weapons, such as Point Sensors and Ink Mines, allowing the user of this ability to evade detection more easily. A Kensa .52 Gal user will likely be a constant target of their opponents' bombs and Tenta Missiles to break through their Splash Wall/Booyah Bomb zoning tactic. Therefore, they can greatly benefit from reducing the damage taken from their opponents' bombs and special weapons. Just three ability points, or one sub, provide plenty of utility:[11][12][13][14]

A Kensa .52 Gal user will inevitably come in contact with the opponent's ink on various surfaces — mostly resulting from opposing bombs and Tenta Missiles, which can both be damaging and reduce mobility. Ink Resistance Up not only partially offsets the reduction in mobility but also delays the damage taken from contact with opposing ink:[12][13][14]

While powerful, the Kensa .52 Gal has a high shot spread compared to other short-ranged shooters, reducing its ability to splat opponents consistently. Main Power Up reduces the angle of deviation of the Kensa .52 Gal's shots – whether fired from the ground or while jumping – increasing the main weapon's precision.[13] In addition, Main Power Up will reduce the chances of shots going towards the outer reticle when jumping, further improving its accuracy.[16]The 715 Kensa .52 Gal builds submitted to Sendou.ink tend to have 9-16 ability points of Main Power Up:[17]

While the traits and kit of a Kensa .52 Gal provides its user great survivability, there will still be moments in a match when it is more prudent to retreat back to the safety of their spawn point rather than attempt to hold off multiple opponents. Quick Super Jump decreases both the "charge" time before and the travel time of a Super Jump, allowing a Kensa .52 Gal user to escape unfavorable situations more easily to preserve precious special gauge progress.[12][13][14]

Special Charge Up accelerates building up the special gauge for Booyah Bomb. While the Kensa .52 Gal does a great job of farming Booyah Bomb, its user can benefit from constantly having Booyah Bomb available to ensure more opportunities to either zone out the opposing team or force certain opponents out of position.[13]

Super Jumping to a teammate after respawning carries the risk of getting splatted upon landing, due to the appearance of a Super Jump indicator. When this shoes-exclusive ability is equipped, Stealth Jump better covers this indicator from long-distance opponents, allowing a Kensa .52 Gal user to more safely return to the front lines and more quickly maintain turfing pressure on and zone out the opponent.[13] Over 77% of 715 Kensa .52 Gal builds submitted to Sendou.ink include Stealth Jump.[17]

A self-explanatory ability, Swim Speed Up specifically benefits a Kensa .52 Gal user by allowing them to more quickly retreat from an advancing opponent whenever necessary. It also allows them to establish position more quickly to restrain the opponents' mobility with their Splash Wall.[13] Kensa .52 Gal builds submitted to Sendou.ink typically have 13-19 ability points of Swim Speed Up.[17]

The Kensa .52 Gal didn't garner much attention upon its release. The main weapon was very lackluster due to poor accuracy,[19][20] and Booyah Bomb was also weaker as it did not do as much damage as it currently does, the armor not continuing to protect the user for a brief moment after throwing the bomb, and the bomb's slow explosion. When Main Power Up was added to the game in 4.3.0, which was made to remedy the weapon's accuracy, and Booyah Bomb's buffs in 4.4.0, the Kensa Splattershot Pro rose to the top instead, as Main Power Up would make the weapon have a pseudo-two shot, dealing 49.9 damage and having a similar time to splat compared to the Kensa .52 Gal, in addition to having longer range and a lethal bomb. Therefore, many competitive players considered the weapon to be outclassed by the Kensa Splattershot Pro.[19][20] Throughout the 4.0 patches, the Kensa .52 Gal would be considered a low-mid to mid tier weapon on competitive tier lists, such as those by Chara and Sorin.[19][20]

Versions 5.3.0 and 5.4.0 would bring the Kensa .52 Gal the buffs needed that pushed it to the top. 5.3.0 significantly improved the weapon's accuracy by making the weapon's accuracy reset to normal much quicker, from 55 frames, or just under a second, to 25 frames, or just under half a second. It also now takes 8 shots to reach the lowest accuracy, compared to the original 6, with the weapon's first shot being the most accurate and decreasing the more shots are fired. Additionally, 5.4.0 gave it a major buff to its turfing ability at the end of its range, allowing it to more safely turf for Booyah Bomb, increasing its survivability.[3] These buffs, combined with nerfs to previous top tiers like the Dualie Squelchers and Sorella Brella, made the weapon rise up to the top, only receiving a slap on the wrist nerf in version 5.5.0 that barely reduced its turfing capability and slightly increased its special gauge from 180p to 190p. Chara in his 5.5.0 tier list stated that the weapon is meta-defining, where specific team compositions have to be ran to counter this weapon - with the easiest method being spamming Tenta Missiles.[3] The weapon's rise also invalidated several weapons, which lack the DPS needed to contest its Splash Wall or Booyah Bomb, or do not have ink efficiency to throw bombs at it to break the wall easily and follow up. Such weapons include sloshers and blasters.[3]