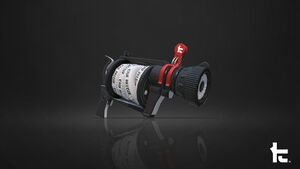 Like its Vanilla and Dolphin variants, the Kensa L-3 Nozzlenose is a medium ranged slayer with quick bursts with some supportive tendencies.[2]

The Splash Wall is mostly used for defensive purposes, but when the time comes, it may be used offensively.

The Kensa L-3 Nozzlenose can easily be countered by a weapon that has more range and has a lethal bomb to destroy Splash Walls, such as the Kensa Splattershot Pro or the Nautilus 79.

Increases main weapon damage up to 33.3 per shot. The Kensa L-3 Nozzlenose is a weapon that has a close potential for a three hit splat, or a one hit splat per