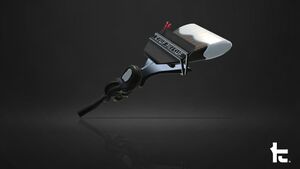 The Kensa Octobrush plays similarly to a roller, being stealthy and getting picks.

As a short-ranged slayer's weapon, the Kensa Octobrush requires its user to be in close quarters with the opponent, who might be inclined to use bombs for zoning out the Kensa Octobrush user. Ever since its introduction in Version 4.3.0, Bomb Defense Up DX will not only reduce the damage taken from opposing sub and special weapons that are not one-hit-splat but will also reduce the duration of the tracking effects of certain opponent's sub and special weapons, such as Point Sensors and Ink Mines, allowing the user of this ability to evade detection more easily.

Allows for more frequent use of Suction Bombs. 3 Ability Points (AP), or one sub ability, will provide 10 flicks after a Suction Bomb on a full tank. 9 AP, or three subs, gives 11 flicks, and 12 AP, or four subs, will give 12. Alternatively, one main ability and one sub can be used.

Not recommended. Even by dedicating all your slots to this ability, you will not run as fast as an Inkbrush. Kensa Octobrush does not run often compared to Inkbrush either, unless it is to quickly dash behind an obstacle to briefly take cover from enemy fire.

These abilities enhance the sharking playstyle of the Kensa Octobrush, allowing it to be more efficient at stealth with Ninja Squid, and Swim Speed Up to patch up the swim speed reduction that Ninja Squid inflicts on the user.