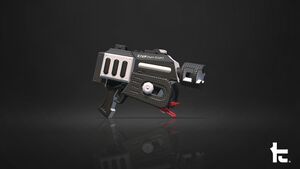 Because blasters are generally poor at turfing, their users will have to rely on their teammates to maintain map control. Not having enough turfing ability – usually from having too many blasters and chargers – presents its own set of problems:[3]

The Kensa Rapid Blaster has great range and decent poking ability, but is vulnerable to being rushed down. Be sure to include some mobile, shorter-ranged weapons in the team composition. Otherwise, a team with too many longer-ranged weapons will have major drawbacks:[3]

Any weapon, including a Kensa Rapid Blaster, can often come in contact with the opponent's ink on various surfaces, which can both be damaging and reduce mobility. Ink Resistance Up not only partially offsets the reduction in mobility but also delays the damage taken from contact with opposing ink:

Decreases ink usage of Torpedoes (only one may be active at a time).

Increases both accuracy while jumping and explosion radius. While the increased blast radius has a small difference, the increased accuracy is valuable due to the weapon's long range, which allows shots to deviate farther from their intended target.

The Kensa Rapid Blaster has trouble turfing and is vulnerable to being rushed down. Due to this, they can greatly benefit from Swim Speed Up, which enables its user to better maintain an optimal distance from an opponent, more quickly respond to an opponents' push, or even escape unfavorable situations.