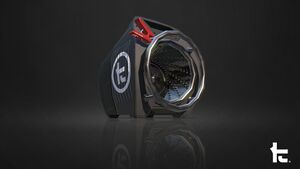 2 sub abilities are typically used to give two extra sloshes.

Ink Saver (Sub) or Last-Ditch Effort can reduce the ink consumption needed to throw a Fizzy Bomb to below half of a full ink tank, making it possible to throw two Fizzy Bombs one after the other. This provides great pressure through ink coverage and splash damage hits.

Ninja Squid allows its user to swim undetected to help sneak up to opponents but also reduces the maximum swimming speed.

When splatted mid-Splashdown, the user loses only 25% of the special gauge. Decreasing it with Special Saver makes the special almost ready again for use through Super Jump or during battle.

Stealth Jump can help cover the indicator of the Super Jump in long distances to come back faster to the action or surprise the opponents with a Splashdown.

Swim Speed Up can help engage and disengage from battles much more swiftly, while Run Speed Up and help maneuver movement during battle when firing the weapon. Both working together as an aggressive build for chasing down opponents and not end up with a trade splats.