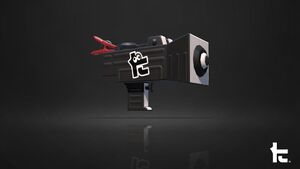 Like its Vanilla variant, the Kensa Splattershot Jr. is a short-ranged, rapidly turfing weapon with a larger ink tank with 10% more capacity and sub and special weapons that provide support. However, its kit also allows its user to directly pressure opponents in a unique, novel way.

The specific traits of the Kensa Splattershot Jr. make it best suited for a support role:

The most reliable way a Kensa Splattershot Jr. player can engage an opponent is through constant and coordinated use of Torpedoes:

Bubbles launched from the Bubble Blower can turf surfaces and splat opponents when popped, but they are even better at providing protection:

A Kensa Splattershot Jr. user with Object Shredder and Special Power Up can combine Torpedoes and Bubble Blower to push into any key areas of the stage:[4]

The Kensa Splattershot Jr. is great at turfing and building up Bubble Blower but poor in splatting. Therefore, it makes a great complement to – and is well complemented by – a slayer, particularly one whose weapon has trouble turfing, such as a Splattershot Pro or a Custom Blaster.

While only one Torpedo may be used at a time, Ink Saver (Sub) still allows for more frequent use of Torpedoes by conserving ink after each Torpedo used. Because a Kensa Splattershot Jr. user depends on their sub weapon more than most other weapon users do on both offense and defense, having the ability to more frequently use Torpedoes is invaluable.

Quick Super Jump decreases both the "charge" time before and the travel time of a Super Jump. A Kensa Splattershot Jr. player will be outmatched by most opponents, and Quick Super Jump can help them escape unfavorable situations more quickly, which avoids getting splatted, maintains a presence on the stage, and preserves precious special gauge progress.

Special Charge Up accelerates building up the special gauge for Bubble Blower. Thanks to its great turfing, the Kensa Splattershot Jr. is quick at farming Bubble Blower, allowing its user to constantly have Bubble Blower available for more successful pushes and counter-pushes.