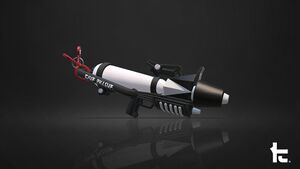 The Kensa Splattershot Pro's long range and high damage allow it to provide support fire and help maintain spatial control, despite its lack of turfing compared to most of the other weapons of a team's composition. Therefore, it is generally redundant to have more than one long-ranged weapon on a team for a few reasons:[3]

Because the Kensa Splattershot Pro is inefficient at turfing, its user will have to rely on their teammates to maintain map control. Not having enough turfing ability – usually from having too many blasters and chargers – presents its own set of problems:[3]