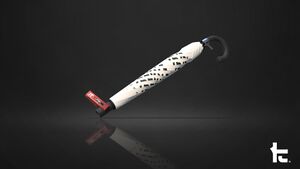 Unlike the previous variants of the Undercover Brella, the Kensa variant has a build that enables it to more effectively play a support role:

Torpedoes have a variety of uses, especially a few that minimize the main weapon's weaknesses.

Ink Armor allows its user's team to either initiate a push, to recapture a Splat Zone for example, or maintain one, such as while locking out the opponent.

The Kensa Undercover Brella is great at turfing and building up Ink Armor but relatively weak in splatting opponents. Therefore, it makes a great complement to – and is well complemented by – a slayer, particularly one whose weapon has trouble turfing, such as a Splattershot Pro or a blaster.

Multiple Ink Armors used by the same team do not stack. Therefore, it would be redundant for a team to have more than two Ink Armor users.

Ink Saver (Sub) allows more frequent use of Torpedos and saves ink for the main weapon after each Torpedo used.

Like other support weapons whose builds include bombs, the Kensa Undercover Brella can greatly benefit from the reduced ink consumption per Torpedo used, allowing its user to spam Torpedoes during either a crucial defensive stand or a late attempt to reclaim the lead.

Special Charge Up accelerates building up the special gauge for Ink Armor. Since farming Ink Armor is one of a few roles of the Kensa Undercover Brella, constantly having Ink Armor available for teammates ensures more successful pushes and counter-pushes.