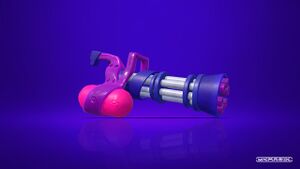 With medium range and incredible turfing, the Mini Splatling is a support weapon:

The Mini Splatling's thorough turfing and medium range make it a good complement to a teammate with a short- to medium-ranged weapon that has difficulty turfing, such as a Splattershot Pro or a blaster.

While the Mini Splatling's Burst Bombs are versatile, they lack certain advantages offered by lethal bombs — particularly either Splat or Suction Bombs, which provide their user's team a couple advantages over another team that has no lethal bombs in its composition:[13]

Upon contacting opposing ink on any surface, damage is taken, and the movement speed of a Mini Splatling user is reduced to 0.24 units per frame. Ink Resistance Up both delays and reduces the damage taken and increases the running speed while in opposing ink.[15][16]

Quick Super Jump decreases both the "charge" time before and the travel time of a Super Jump, helping its user escape unfavorable situations more quickly. As a support player, a Mini Splatling user would have a strong incentive to include Quick Super Jump in their gear to preserve the ability to use Tenta Missiles more readily.[15][16]

Special Charge Up accelerates building up the special gauge for Tenta Missiles, which can help initiate a push or disrupt an opponent's Sting Ray or Booyah Bomb.[15]