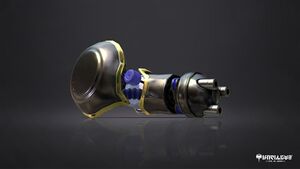 The Nautilus 79, like its silver counterpart, the Nautilus 47, is a unique splatling with its defining trait being able to store any amount of charge for an extended time, similarly to a Goo Tuber.

The many unique traits of the Nautilus 79 make it a slayer:

While a Nautilus 79 is capable of turfing, it spends most of its time holding on to a charge, so its user will have to rely on their teammates to maintain map control for them to move about the map to remain an effective player. Not having enough turfing ability presents its own set of problems:[8]

Inkjet is particularly vulnerable while flying, due to its larger hitbox and slow air speed. Having a teammate with Ink Armor will increase the Inkjet's survivability and allow them to play more aggressively.

Ever since its introduction in Version 4.3.0, Bomb Defense Up DX will not only reduce the damage taken from opposing sub and special weapons that are not one-hit-splat but will also reduce the duration of the tracking effects of certain opponent's sub and special weapons, such as Point Sensors and Ink Mines, allowing the user of this ability to evade detection more easily. Just three ability points, or one sub, offer plenty of utility:[11][12]

A Nautilus 79 user is expected to come in contact with the opponent's ink on various surfaces, which can both be damaging and reduce mobility. Ink Resistance Up not only partially offsets the reduction in mobility but also delays the damage taken from contact with opposing ink.[11][12]

Although the Nautilus 79 can recharge while firing, having some extra bullets in the charge can make a difference when it comes to finishing off opponents. Main Power Up will increase the firing duration of the Nautilus 79 by up to 30%, giving it more bullets to fire in the charge and also making it more ink efficient, as the ink consumption remains the same despite firing more bullets.

Quick Super Jump decreases both the "charge" time before and the travel time of a Super Jump. Both aggressive and supportive Nautilus 79 users will benefit since Quick Super Jump allows them to both return to the front lines more quickly and escape unfavorable situations more easily to preserve special gauge progress.[11][12]

While Run Speed Up is the bread and butter of most splatling builds, the Nautilus 79 does not need as much compared to others due to its ability to store a charge.[3] Nonetheless, some Run Speed Up will still benefit the user, mostly due to its increased mobility while firing.

Being able to store a charge while swimming is the biggest part of the Nautilus 79's gameplay. Swim Speed Up enables its user to more quickly close the distance towards an opponent, more quickly respond to an opponents' push, or even escape unfavorable situations.

Not recommended. Ninja Squid does not hide the glow from a held charge. [15]