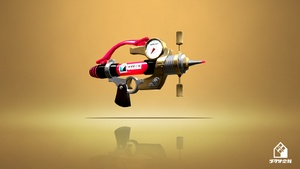 Like the Splash-o-matic, the Neo Splash-o-matic is a lightweight, short-ranged, rapid firing weapon with the best accuracy among all shooters — tied only with the Squeezer's semiautomatic mode. However, its kit provides it even more mobility and versatility than its Vanilla variant, allowing its user to flex their role within its team's composition during battle.

While primarily a slayer's weapon, the Neo Splash-o-matic has supportive elements that aid its flexibility:

The Neo Splash-o-matic has a few weaknesses its user has to account for:

The Suction-Bomb Launcher is designed to either help push into a highly contested area or help repel the opponent's push:

While Burst Bombs have excellent synergy with the Neo Splash-o-matic, they lack certain advantages offered by lethal bombs — particularly either Splat or Suction Bombs, which provide their user's team a couple advantages over another team that has no lethal bombs in its composition:[12]

Due to the Neo Splash-o-matic's set of strengths and weaknesses, it is recommended to team its user with at least one teammate with a lethal bomb in their kit, one longer-ranged weapon user, and one teammate with a means of neutralizing an opposing Kensa .52 Gal user's walling and farming strategy. Some weapons are capable of filling more than one of these roles:[13]

An opposing Neo Splash-o-matic user is accurate, mobile, and damaging (with enough Main Power Up) — an already deadly combination. Their ability to support their team with efficient turfing and Suction-Bomb Launcher adds to their threat level. Understand and respect these strengths in order to be able to exploit their few weaknesses.

A Neo Splash-o-matic user is usually expected to lead pushes towards their opponents' side, which puts them at risk of damage from opposing bombs and special weapons. Introduced in Version 4.3.0, Bomb Defense Up DX will not only reduce the nonlethal damage taken from opponents' sub and special weapons but will also reduce the tracking duration of opponents' Ink Mines and Point Sensors, allowing the user of this ability to evade detection more easily. Just three ability points, or one sub, offer plenty of utility:[14][15][16][17]

Any good slayer using a short-ranged weapon like the Neo Splash-o-matic is expected to come in contact with the opponent's ink on various surfaces, which can both be damaging and reduce their mobility. Ink Resistance Up not only partially offsets the reduction in mobility but also delays the damage taken from contact with opposing ink.[15][16][17]

The Neo Splash-o-matic is one of a few weapons whose damage can be increased with a reasonable amount of Main Power Up. Even support-minded players should invest in this ability for better self-sufficiency.[16] 31 ability points – equal to one main and seven subs – are enough to reach the Neo Splash-o-matic's damage cap of 33.3 HP, which can also be obtained with either two mains and four subs (32 AP, the most common amount on Sendou.ink)[19] or three mains and one sub (33 AP).

Ninja Squid reduces detection by opponents while swimming on non-vertical surfaces. It allows its user to swim at full speed undetected at the cost of about 20% of the maximum swimming speed as of Version 3.0.0. Because a Neo Splash-o-matic user might have difficulty attacking some opponents head-on, Ninja Squid can make it easier for its user to shark and more safely approach these opponents. The mobile Neo Splash-o-matic user can afford the speed reduction more than users of less mobile weapons can.[16][20]

The inclusion of Burst Bombs with the Neo Splash-o-matic minimizes the second benefit, and the latter requires having a teammate with Bubble Blower. However, it might help a Neo Splash-o-matic user to have one Rainmaker-specific loadout with Object Shredder to hasten popping the Rainmaker shield.

Quick Super Jump decreases both the "charge" time before and the travel time of a Super Jump. Neo Splash-o-matic users who include this ability will benefit in two ways since Quick Super Jump allows them to both return to the front lines more quickly and escape unfavorable situations more easily to preserve special gauge progress.[15][16][17]

Super Jumping to a teammate after respawning carries the risk of getting splatted upon landing, due to the appearance of a Super Jump indicator. When equipped, Stealth Jump better covers this indicator from long distance opponents, allowing its user to more safely return to the front lines and maintain pressure on the opponent.[16][21]

To compensate for the main weapon's short range, Sub Power Up increases the throwing speed and, thus, the range of Burst Bombs, enabling a Neo Splash-o-matic user to challenge opponents from a farther, more safer distance.[16]

As a short-ranged weapon that excels at flanking, the Neo Splash-o-matic greatly benefits if it is able to swim faster. Swim Speed Up enables its user to more quickly close the distance towards an opponent, more quickly respond to an opponents' push, or even escape unfavorable situations.[16]