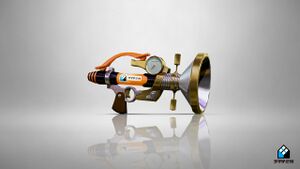 The Neo Sploosh-o-matic functions differently than in the second game.

Point Sensors lack certain advantages offered by lethal bombs — particularly either Splat or Suction Bombs, which provide their user's team a couple advantages over another team that has no lethal bombs in its composition:

Cold Blooded is an ability that shortens the duration of position-tracking to 50% of normal tracking time. As a stealthy, mobile weapon, Cold Blooded is immensely useful for the Neo Sploosh-o-matic, enhancing its sneakiness, facilitating ambushes, preventing enemy ambushes, enabling more mobility, and preventing chargers from quickly splatting players.

Swim Speed Up increases movement speed while in squid form, allowing the user to charge into situations and to escape. This also affects the movement speed of the Kraken, which can improve its performace.

Quick Respawn always shortens the time taken to respawn, allow a Neo Sploosh-o-matic user to be aggressive without much consequences. 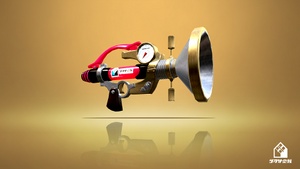 The Neo Sploosh-o-matic is a weapon with a very different playstyle than its other variants. Instead of being an aggressive slayer, its kit forces it into a very passive support role, spamming Tenta Missiles and typically avoiding direct confrontation with the other team.[4]

While the Neo Sploosh-o-matic is a slayer's weapon, its lack of range and accuracy forces it to be played differently from how typical slayer's weapons are played:

The Neo Sploosh-o-matic's rapid turfing and Tenta Missle means that a fellow slayer does not necessarily need to turf or build up their specials as often, freeing them to use other complementary weapons:

While having multiple players on the same team launching Tenta Missiles might seem like a fun and easy means to cause opponents to scramble for cover, having too many players equipped with them – no more than one or two – can reduce the effectiveness of a team composition:

The very short range of the Neo Sploosh-o-matic makes it easy for opponents to zone it out with most other main weapons and bombs.

A competent Neo Sploosh-o-matic user is more likely to attack via flanking or sharking:

Ninja Squid reduces detection by opponents while swimming on non-vertical surfaces. It allows its user to swim at full speed undetected at the cost of about 20% of the maximum swimming speed as of Version 3.0.0. Because a Neo Sploosh-o-matic user has difficulty attacking most opponents head-on, Ninja Squid can make it easier for its user to shark and more safely approach opponents.

Special Charge Up accelerates building up the special gauge for Tenta Missiles. As one of it's main advantages being able to spam Tenta Missiles, constantly having Tenta Missiles available can help for pushes and pressuring opponents.

Sub Power Up decreases the time it takes to Super Jump to a Squid Beakon. Sub Power Up can help a Neo Sploosh-o-matic user benefit from Squid Beakons more and allow their team to get back to the battlefield quickly to push.

As a short-ranged weapon that excels at flanking, the Neo Sploosh-o-matic greatly benefits if it is able to swim faster. Swim Speed Up enables its user to more quickly close the distance towards an opponent, more quickly respond to an opponents' push, or even escape unfavorable situations.