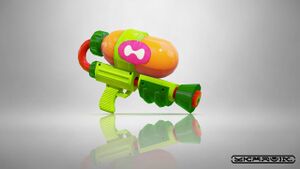 The Tentatek Splattershot is considered an all-around weapon[1]. The main weapon itself has a high rate of fire, and high damage, while the special can give the weapon a longer range option.

The Tentatek Splattershot, compared to the weapon in the second game, has a few changes.

Cold Blooded is an ability that shortens the duration of position-tracking to 50% of normal tracking time. As a stealthy, mobile weapon, Cold Blooded is immensely useful for the Tentatek Splattershot, enhancing its sneakiness, facilitating ambushes, preventing enemy ambushes, enabling more mobility, and preventing chargers from quickly splatting players. 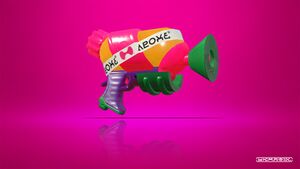 The Tentatek Splattershot is a slayer's weapon, designed to splat an opponent in as few as three hits with its rapid firing, good accuracy, and short to medium range.

The Splat Bomb is a versatile sub weapon with a variety of purposes suited for any slayer:

The Tentatek Splattershot's versatility allows it to fit in almost any team composition. However, its Inkjet greatly benefits from a teammate's Ink Armor:

Unless a Tentatek Splattershot user is on an extended splatting streak, they can expect to get splatted often. When equipped, Comeback grants 10 ability points of six different stackable abilities for twenty seconds after respawning from getting splatted by an opponent:

Ink Saver (Sub) and Swim Speed Up are the most useful for the Tentatek Splattershot wielder, allowing them to throw Splat Bombs more often and more quickly pursue and pressure the opponent upon returning from spawn.

Main Power Up increases accuracy while either on the ground and while jumping.

Although Stealth Jump is the more popular choice, an excuse could be made for Drop Roller due to the ability working on Inkjet landings. This allows the user to potentially roll away from enemy fire, and also gives them a mobility boost for 3 seconds in the form of 10 AP of Run Speed Up, Swim Speed Up, and Ink Resistance Up.