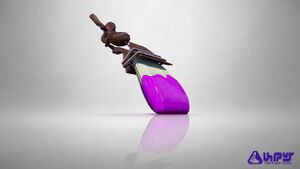 The Octobrush like its variants, is a shorter ranged weapon with high damage and more range than the Inkbrush. The inclusion of the Kraken allows the weapon to take more risks while Squid Beakon is helpful on certain rotations.

Squid Beakon lacks certain advantages offered by lethal bombs — particularly either Splat or Suction Bombs, which provide their user's team a couple advantages over another team that has no lethal bombs in its composition:

Quick Respawn always shortens the time taken to respawn, allow a Octobrush user to be aggressive without much consequences.

Swim Speed Up increases movement speed while in squid form, allowing the user to charge into situations and to escape. This also affects the movement speed of the Kraken, which can improve its performance. 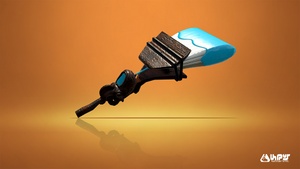 The Octobrush functions with some differences than in Splatoon

While not always as reliable as Splat Bombs, Autobombs still provide plenty of utility for the Octobrush user:

While Autobombs technically count as a lethal bomb, they are not as reliable as conventional bombs. Due to this, be sure to still include weapons whose kits have other lethal bombs — particularly either Splat or Suction Bombs, which provide its user's team many advantages over another team that has no lethal bombs in its composition:[4]

Like other weapon kits with Inkjet, the Octobrush greatly benefits from a teammate's Ink Armor:

Ever since its introduction in Version 4.3.0, Bomb Defense Up DX will not only reduce the damage taken from opposing sub and special weapons that are not one-hit-splat but will also reduce the duration of the tracking effects of certain opponent's sub and special weapons, such as Point Sensors and Ink Mines, allowing the user of this ability to evade detection more easily. Being a slayer weapon, its user risks damage from both bombs and special weapons and can greatly benefit from reducing the damage taken from them. Just three ability points, or one sub, offer plenty of utility:[5][6]

A Octobrush user can expect to come in contact with the opponent's ink on various surfaces, which can both be damaging and reduce mobility - especially since this weapon has poor turfing ability. Ink Resistance Up not only partially offsets the reduction in mobility but also delays the damage taken from contact with opposing ink.[5][6]

As a short-ranged weapon that excels at flanking, the Octobrush user will greatly benefits if it is able to swim faster. Swim Speed Up enables its user to more quickly close the distance towards an opponent, more quickly respond to an opponents' push, or even escape unfavorable situations.

Drop Roller can be used due to the ability working on Inkjet landings. This allows the user to potentially roll away from enemy fire, and also gives them a mobility boost for 3 seconds in the form of 10 AP of Run Speed Up, Swim Speed Up, and Ink Resistance Up. Unlike other Inkjet weapons, an Octobrush user can roll away and splat the opponent more reliably and quickly. 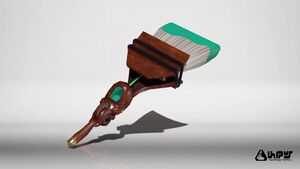