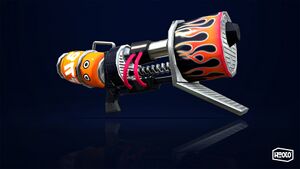 The Range Blaster, like its Custom and Grim variants, is a medium-ranged blaster with good zoning and high splatting potential. The Range Blaster offers a kit that focuses heavily on area denial with its bomb and Ink Storm.

The Range Blaster can flex between the slayer and support roles:

Because blasters are generally poor at turfing, their users will have to rely on their teammates to maintain map control. Not having enough turfing ability – usually from having too many blasters and chargers – presents its own set of problems:[8]

Ink Storm is intended for either contesting territory, such as Splat Zones, or stalling opponents' pushes but is not as reliable at splatting opponents who actively avoid the Storm. Therefore, it is advised to have other special weapons available to complement Ink Storm, as having too many users of any combination of Ink Storm and Bomb Launcher (no more than two) in a team composition will limit a team's arsenal of weapons:[8]

Unless a Range Blaster user is on an extended splatting streak, they can expect to get splatted often. When equipped, Comeback grants 10 ability points of six different stackable abilities for twenty seconds after respawning from getting splatted by an opponent:

Aside from Run Speed Up, all these abilities help a Range Blaster user. The Ink saver abilities help the weapon be more ink efficient and Swim Speed Up allows the user to move faster. Special Charge Up helps the user with its higher special requirement to get Ink Storm more often.[9]

Quick Respawn shortens respawn time after getting splatted (under specific conditions). Like other slayer's weapons, the Range Blaster benefits from abilities that promote aggressive play, such as Quick Respawn and Stealth Jump.