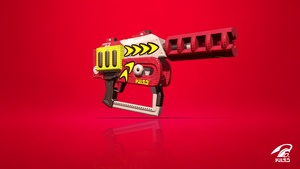 The Rapid Blaster Pro Deco is the longest-ranged blaster along with its vanilla variant, giving it a defensive playstyle focused on support and poking opponents. Unlike said vanilla variant, this weapon has a kit that can fulfill the roles of being a supportive anchor.

The Rapid Blaster Pro Deco can flex between the support and anchor roles:

Because blasters are generally poor at turfing, their users will have to rely on their teammates to maintain map control. Not having enough turfing ability – usually from having too many blasters and chargers – presents its own set of problems:[8]

The Rapid Blaster Pro Deco has great range and decent poking ability, but is vulnerable to being rushed down.[2] Be sure to include some mobile, shorter-ranged weapons in the team composition. Otherwise, a team with too many longer-ranged weapons will have major drawbacks:[8]

The Rapid Blaster Pro Deco's lack of lethal bombs – particularly either Splat or Suction Bombs – generally necessitates its user's teammates to equip weapons that include them. Lethal bombs provide their user's team a couple advantages over another team that has no lethal bombs in its composition:[7][8]

An opponent's Splash Wall is often a hindrance, but it can be worked around:

Keep an eye on the HUD to know when the opposing Rapid Blaster Pro Deco user has Ink Armor ready to use, and both watch and listen for when it is activated.

Ever since its introduction in Version 4.3.0, Bomb Defense Up DX will not only reduce the damage taken from opposing sub and special weapons that are not one-hit-splat but will also reduce the duration of the tracking effects of certain opponent's sub and special weapons, such as Point Sensors and Ink Mines, allowing the user of this ability to evade detection more easily. Since the Rapid Blaster Pro Deco is prone to being attacked by bombs and Tenta Missiles due to it being an anchor, having this ability is great for improving its survivability. Just three ability points, or one sub, offer plenty of utility:[9][10]

Any weapon, including a Rapid Blaster Pro user, can often come in contact with the opponent's ink on various surfaces, which can both be damaging and reduce mobility. Ink Resistance Up not only partially offsets the reduction in mobility but also delays the damage taken from contact with opposing ink:[9][10]

The Rapid Blaster Pro Deco uses a large portion of the ink tank per shot. Ink Saver (Main) not only allows it to fire more shots per ink tank but also conserves ink for Splash Wall use.[9]

Main Power Up improves the Rapid Blaster Pro Deco's jump accuracy by up to 50%, in addition to increasing the blast radius of its shots up to 5.9%. While the increased blast radius has a small difference, the increased accuracy is valuable due to the weapon's long range, which allows shots to deviate farther from their intended target.

Quick Super Jump decreases both the "charge" time before and the travel time of a Super Jump, helping its user escape unfavorable situations more quickly. There are some situations where a Rapid Blaster Pro Deco will have to jump back to spawn to avoid getting splatted and preserve its Ink Armor, and Quick Super Jump will help in this regard.[9][10]

Despite a 180p special gauge, the Rapid Blaster Pro Deco's poor turfing means that it will not have Ink Armor readily available like other support weapons, like an N-ZAP '85. Special Charge Up can help mitigate this issue.

The Rapid Blaster Pro Deco has trouble turfing and is vulnerable to being rushed down. Due to this, they can greatly benefit from Swim Speed Up, which enables its user to better maintain an optimal distance from an opponent, more quickly respond to an opponents' push, or even escape unfavorable situations.