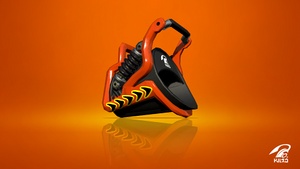 The Slosher Deco has the traits of a powerful slayer's weapon: high damage and medium range.

The Slosher Deco can play more aggressively than its standard variant, but not as aggressively as the Soda Slosher, due to a lack of bombs and an expensive Baller. This lack of bombs means that it can struggle to find a slot in some team compositions.[3] While not a poor turfing weapon, the Slosher Deco greatly benefits if teamed up with a weapon that is more efficient at turfing, such as a Splattershot Jr. or an N-ZAP '85.

A Slosher Deco user in a slayer role generally gets close enough to the opponent and their bombs. Ever since its introduction in Version 4.3.0, Bomb Defense Up DX will not only reduce the damage taken from opposing sub and special weapons that are not one-hit-splat but will also reduce the duration of the tracking effects of certain opponent's sub and special weapons, such as Point Sensors and Ink Mines, allowing the user of this ability to evade detection more easily.

Unless a Slosher Deco wielder is on an extended splatting streak, they can expect to get splatted often. When equipped, Comeback grants 10 ability points of six different stackable abilities for twenty seconds after respawning from getting splatted by an opponent:

Because the Slosher Deco consumes ink quickly, both Ink Saver (Main) and Ink Recovery Up are the most useful for a Slosher Deco user, allowing them to pursue and pressure the opponent upon returning from spawn with less worry about their ink efficiency. In addition, Special Charge Up will offset the high special gauge for the Baller.

Any good slayer like a Slosher Deco user is expected to come in contact with the opponent's ink on various surfaces, which can both be damaging and reduce mobility. Ink Resistance Up not only partially offsets the reduction in mobility but also delays the damage taken from contact with opposing ink.

Super Jumping to a teammate after respawning carries the risk of getting splatted upon landing, due to the appearance of a Super Jump indicator. When equipped, Stealth Jump better covers this indicator from long distance opponents, allowing its user to more safely return to the front lines and maintain pressure on the opponent. [5]