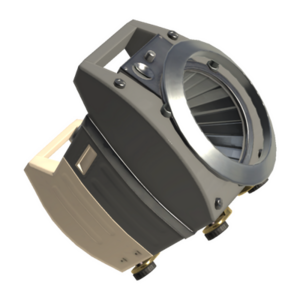 The high rate of damage, medium firing rate, and moderate mobility of the Sloshing Machine make it a slayer weapon:

The Sloshing Machine has a few notable benefits:

The Sloshing Machine has a few notable drawbacks:

Fizzy Bombs can provide great coverage and pressure with splash damage, even in stages and areas that are more open:

i.e any damage fizzy and direct is an insta kill

While Fizzy Bombs turf an area relatively well, the Sloshing Machine itself is poor in turfing an area. Its user will have to rely on their teammates to maintain map control. Not having enough turfing ability – usually from having too many blasters and chargers – presents its own set of problems:[2]

The Sloshing Machine can greatly benefit from both the overall reduced ink consumption and quicker ink recovery, allowing its user to more freely use either the main weapon or Fizzy Bombs during either a crucial defensive stand or a late attempt to reclaim the lead.

A self-explanatory ability, Swim Speed Up enables an Sloshing Machine user to more rapidly close the distance towards an opponent, more quickly respond to an opponents' push, or even escape unfavorable situations.